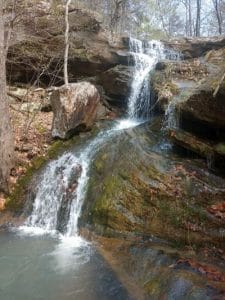 Why I Chase Waterfalls

I’ve been a hiker since 1969.  I was 17 years old, and my first serious hike was in Arizona. Until then, I’d never hiked, and yet – I can’t explain it, call me ambitious – there we were, me and my parents in a hotel at the rim of the Grand Canyon, and one morning I decided to take the trail to the bottom. Why not?  It seemed doable.  Only after reaching the bottom three hours later did I realize that one bottle of water was pretty inadequate for hiking back to the top on an Arizona summer afternoon. But I made it.  I did mention that I was 17, ignorant, and yet healthy, didn’t I?

From that day on, a passion for hiking had a hold on me.  The scenery around me was no longer just there; it called my name and implored me to come discover its beauties.  So, within the next three years, I had climbed in the Great Smoky Mountains of North Carolina and Tennessee, the Green Mountains of Vermont, the White Mountains of New Hampshire, the Shenandoah range of Virginia, the Adirondacks of New York.  Before I was 23 years old I’d hiked to the high point of a dozen states.

The passion has never abated.  Decades later, at age 67, I’ve now hiked to the highest points of 34 states. Some of the 50, I’m sure I’ll never achieve, which is quite alright.  This isn’t a contest and I’m not out to prove to anyone that I can complete a list.  And at this age, I’m not so capable anymore of ascending to the lofty mountain peaks.  But living near the Arkansas Ozarks, I’ve recently discovered a new set of hiking destinations.  Those who share this aspiration with me call it “chasing waterfalls.”

That may strike you as a peculiar phrase: chasing waterfalls.  Because we know that to speak of chasing means, a moving target, and a pursuit to catch it.  Now I’ll admit, I’ve been to several waterfalls again and again, and have yet to find one that isn’t right where I last found it.  But those of us who delight in this hobby are, I suppose, taking a bit of poetic liberty. We’re putting our own meaning on the chase.

In the Ozarks, the waterfalls are everywhere.  About all you have to do is venture into the woods, make sure you’re not on someone’s private property, and chances are, if you follow a creek, you’ll find a waterfall soon.  Chasing waterfalls is, of course, just a witty expression. But there’s more to it, in a way.  For after all, they are a moving target.  A moving target because, once you’ve found one waterfall, you crave seeing the next one.  And there are always more of them to go hunt down.  It’s you who has to keep moving, not them. You are the one who ends up on the chase.

And I think of it as chasing waterfalls for another reason: when you walk into the forest and down a creek to find one, you never know if it’s going to be a dripping trickle, or a pleasant cascade, or a raging torrent with a thunderous voice.  Their roar has left me with many a memory of a power and glory so overwhelming, it was impossible to even hear one another speak.  Because another Voice was speaking louder.

Psalm 19 speaks of how the creation our Lord has made declares the glory of God.  Verse 4: “Their voice goes out through all the earth, and their words to the end of the world.”  It has often seemed as if I walked to a remote “end of the earth” location to chase my next waterfall, but every time, without exception, it was worth it.  Because I once again saw and heard the glory of God in the splendor of what He has made.

I’d be lying if I said that every time I stand at the base of a roaring waterfall, the first and only thought to cross my mind is thanks to God and rejoicing in His abundant glory and power. But after hiking to over a hundred of them, there’s no doubt … the impress of His glory in beholding these, some of His most gorgeous handiwork, has left its mark.  And each one makes me eager to chase down another, to enjoy more of His astonishing creativity and skillfulness.  May we ever praise Him for such beauties.