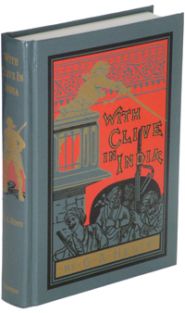 With Clive in India: The Beginnings of an Empire (G. A. Henty)

The period between the landing of Clive in India and the close of his career was eventful in the extreme. At its commencement the English were traders existing on sufferance of the native princes; at its close they were masters of Bengal and of the greater part of Southern India. The author has given a full account of the events of that stirring time, while he combines with his narrative a thrilling tale of daring and adventure.

With Clive in India

The Beginnings of an Empire

Charlie Marryat, a lad of marvelous pluck who possesses a great love of adventure, secures a job as a writer with the East India Company, and travels to India, only to discover a far more exciting occupation than his intended one. Enlisted by Clive in his campaigns to defeat the French and establish the British in India, Charlie distinguishes himself in a number of battles and earns a reputation for courage and ingenuity. He survives the “Black Hole’ of Calcutta, trains a native force for one of England’s Indian allies, and rescues Ada Haines form an Indian harem. After ten years in India, he returns to England a wealthy man as a result of his services to a number of Indian princes.