Skip to content
View cart “Cloak of the Light: Wars of the Realm, Book 1 (Chuck Black)” has been added to your cart.
Sale! 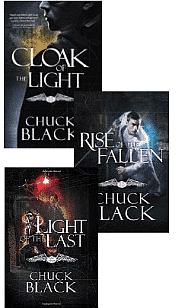 All 3 volumes of Chuck Black’s WARS OF THE REALM Series:

What if there was a world beyond our vision, a world just fingertips beyond our reach? Atheist Drew Carter discovers that this is precisely the case … and the only one who can explain the things he’s encountering is a young Christian girl he’s just met.

Wars of the Realm

Includes all 3 volumes in Chuck Black’s Wars of the Realm series:

Cloak of the Light (Book 1)

What if there was a world beyond our vision, a world just fingertips beyond our reach? What if our world wasn’t beyond their influence? Drew is caught in such a world – a world of light – just inches away from the dark.

Tragedy and heartache seem to be waiting for Drew Carter at every turn, but college offers Drew a chance to start over. That is, until an accident during a physics experiment leaves him blind and his genius friend, Benjamin Berg, missing.

As his sight miraculously returns, Drew discovers that the accident has heightened his neuron activity. He now has skills and sight beyond the normal man. When he begins to observe fierce invaders that no one else can see, he questions his own sanity, and so do others. But is he insane or do the invaders truly exist?

With help from Sydney Carlyle, a mysterious but kind girl who offers encouragement through her faith, Drew searches for his missing friend, Ben, who seems to hold the key to unlocking this mystery. As the dark invaders close in, will he find the truth in time?

Rise of the Fallen (Book 2)

A 6,000 year war rages and now the demonic Fallen are coming for him—the one man shrouded in mystery. Only Validus stands in their way.

Validus is the last and least of God’s angels, but he’s seen much across the millennia since his creation. Empires have risen and fallen as angelic and demonic forces battle in a raging war that will determine humanity’s fate – and the fate of his defeated brothers.

Eventually called to be an earth-bound warrior, Validus rises to a position of power and respect.  Validus commands legions of angels through impossible battles and overwhelming odds. But when orders arrive from the Creator’s most elite Messenger, he finds himself suddenly demoted.  He now has a task of apparent insignificance, considering the fierce war they are waging against the demonic Fallen.  He is to devote himself to the covert protection of just one unbelieving man!

Validus soon finds himself on a mission that will push him beyond his abilities as he battles to protect Drew Carter, for The Fallen are coming for him. Legions of them.

As Validus races against time to discover why Drew is so important to humanity’s survival, can he stand between Drew and all who would destroy him?

A story of spiritual warfare, The Light of the Last is an action-packed adventure from beginning to end.

Drew Carter struggles to understand the escalating battle between the powerful warrior forces that only he can see. When he is offered an opportunity to redeem his misunderstood past by becoming an agent in the CIA, he jumps on it and Validus, the angel protecting Drew, and his hand-picked team of heavenly host find themselves facing impossible odds in their sworn duty.

As the battle in the spiritual realm intensifies, so does Drew’s fight to unveil a horrific plot that could destroy the United States. Validus and his men find themselves in a race against time and against the devious plots of his ancient friend-turned-nemesis, Niturni, a powerful demon of cunning skill.

As Validus wrestles for the soul of Drew Carter, he finds hope in Sydney Carlyle and her unflinching, steadfast testimony in Drew’s life. She seems to be the only one that can reach him, but will it be too late to save the man-and the nation?