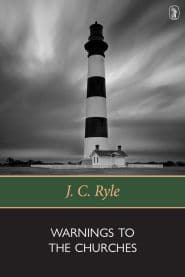 The ambiguity and obscurity of statements from religious leaders today often confuse ordinary Christians. J. C. Ryle’s writings were of a different character. His outspoken comments can still help us towards clear Bible-based convictions.

Warnings to the  Churches

The ambiguity and obscurity of statements from religious leaders today often confuse ordinary Christians. J. C. Ryle’s writings were of a different character. His outspoken comments can still help us towards clear Bible-based convictions. The church’s doctrine and practice are in constant danger of being corrupted from their original divinely-given character.

Seeing this, Ryle felt compelled to utter a warning, however controversial this might prove. As he observes, ‘ There are times when controversy is a benefit. Give me the mighty thunderstorm rather than the pestilential malaria. The one walks in darkness and poisons us in silence; the other frightens and alarms us for a little season. But it is soon over, and it clears the air. (page 111).

Strong convictions and clarity of expression always mark Ryle’s writings. Nowhere is this more evident than in the addresses and articles brought together as Warning to the Churches.

John Charles (J.C.) Ryle (1816-1900) once admitted that, as a young man, he thought that being a Christian was about the most unpleasant possible thought that could come to his mind. But one day in 1837, he was providentially in a church where he heard the Scripture read out loud: “By grace are ye saved through faith, and that not of yourselves, it is the gift of God.” (Ephesians 2:8). His life was transformed, and by 1841, the Church of England ordained him a minister of the gospel.

In 1880, at 64 years old, after serving 39 years in the ministry, Ryle became the first Bishop of Liverpool, a post he held for 20 years. He was affectionately known as “the working man’s bishop.” Ryle was firm in his theological convictions, never suffering from what he called a “boneless, nerveless, jellyfish condition of soul.” His successor described him as a “man of granite”, and Charles Spurgeon called Ryle, his contemporary, an “evangelical champion.” Ryle passed into heaven in the year 1900.

Today, more than a hundred years after his death, Ryle’s works remain some of the Christian church’s most cherished treasures.