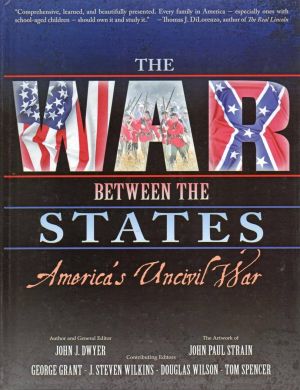 The War Between the States: America’s Uncivil War – with free Timeline Chart

Get Dwyer’s book and a Timeline Chart of the War Between the States for this special $44.50 price!

The definitive history of America’s Uncivil War. Few events in America’s history have been as controversial as the bloody War between our southern and northern states, and no other event has so changed our citizenry and our government. John J. Dwyer’s The War Between the States offers over 700 action-packed pages of war-time drama that will forever change the way Americans view the Civil War.

Featuring research and articles from George Grant, J. Steven Wilkins, Douglas Wilson, and Tom Spencer, the book is also illustrated by the paintings of John Paul Strain, and includes nearly 500 photographs, maps and charts, as well as dozens of biographies of politicians, theologians, writers, soldiers, inventors, spies, nurses, and journalists. Learn the amazing stories behind this War, and what they mean.

The War Between the States

John J. Dwyer’s highly valuable book is divided into three portions. The first discusses the coming of the War Between the States. Four chapters cover slavery–the way slaves lived, the political problems over slavery, how slavery in the United States compared to slavery in the Bible, etc.–while others cover nullification, secession, tariffs, and nationalism. Dwyer also includes several chapters on the different worldviews of the North and the South (it is here that his Reformed beliefs come out most clearly) in which the effects of the Great Awakenings and Unitarianism on American religion are discussed.

Facets on events, documents, and important people add vivid life to the volume. For example, in one facet parts of a sermon by John Jasper, a black preacher, are printed. Other facets cover the history of secession in America, the Enlightenment belief in a “social contract,” and the influence of educator Horace Mann.

The War from Fort Sumter to Appomattox

The second part of Dwyer’s The War Between the States concerns the War itself, from its early days to its end at Appomattox. Dwyer keeps the pace moving rather than allowing himself to become bogged down in unnecessary detail. One chapter discusses the religious revivals in the armies, and facets cover such various topics as “The Battle Hymn of the Republic,” Cherokee general Stand Watie, martial law in Maryland, federal Christian Oliver O. Howard, and the rules of just war.

The last section gives an in-depth look at Reconstruction. One of the strengths of Dwyer’s book is that he does his utmost to be fair, and this trait thankfully shows in his discussion of Reconstruction. We read about the struggles of Southerners (both black and white) to get on their feet; the corruption of the government after the War; and the various vigilante movements that sprang up. Dwyer, of course, discusses the early Klan (as well as how it differs from the modern day Klan), but he also writes about the Klan’s pro-federal counterpart, the Union League. Again, the facets are both diverse and interesting: some document the experience of black leaders, one includes the fiery anti-Radical speech of Benjamin Hill, and another covers the Congressional Minority Report on the Klan.

In the face of all the historical information, Dwyer never fails to remember that history is, after all, a story, and The War Between the States creates a sweeping picture in the minds of readers that will not soon be erased.

FREE with your order!

We include this Timeline Chart of the War Between the States 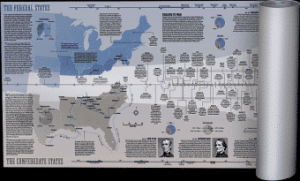 This visually rich timeline, spanning the years surrounding the War Between the States, gives a chronological look at the events that led up to and followed one of the most influential events in our nation’s history. From the military battles and political struggles, to influential inventions and popular literary works and ideologies, see these events in their historical context.

The timeline also includes a map of states, territories, and battles, biographies of key figures, and charts showing the military and economic resources of both sides.

John Dwyer is now in his twelfth year as Adjunct Professor of History and Ethics at Southern Nazarene University. He is former history chair at Coram Deo Academy, near Dallas, Texas. His other books include The Oklahomans, the novel When the Bluebonnets Come, the historical novels Stonewall and Robert E. Lee, and the historical novels Shortgrass and Mustang.

John and Grace have one daughter and one grandson and live in Norman, Oklahoma. They are members of the First Baptist Church of Norman, where they serve in a variety of teaching, mission, and other ministry roles.