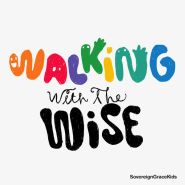 God tells us that “whoever walks with the wise becomes wise, but the companion of fools will suffer harm.” (Prov 13) Walking With the Wise contains 13 songs inspired by the Proverbs, all meant to encourage kids to joyfully follow God’s commands!

Scroll down to see the full list of songs on this CD.

Walking with the Wise

God tells us that “whoever walks with the wise becomes wise, but the companion of fools will suffer harm” (Proverbs 13:20). Walking with the Wise contains thirteen songs all inspired by Proverbs, and all meant to encourage kids to joyfully follow God’s commands. The album is aimed at a 6–10 year old audience, though older and younger children, and even parents, may find themselves singing along.

Sovereign Grace Music is an outgrowth of the family of churches known as Sovereign Grace Churches. In 1984 we produced our first cassette tape, Mighty God. As our churches grew we started looking for a way to distribute more songs that we were writing for congregational worship. So, Steve Cook recorded 16 song service tapes of about 8 songs each for that purpose, followed by a series of 9 Come & Worship recording projects. During this same time, we also recorded three albums with Word’s HeartCry label. In the early 2000s we moved towards making our albums centered on a specific theme. Since then, we’ve recorded over 30 albums. Bob Kauflin has been involved in Sovereign Grace Music since the mid-80s, and is the current Director of Sovereign Grace Music.

You can always expect songs of solid theological content which express love and devotion to the Triune God in CDs from Sovereign Grace Music.