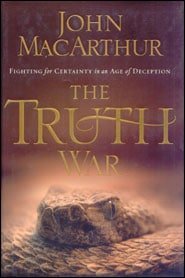 The Truth War: Fighting for Christianity in an Age of Deception (John MacArthur)

Right now, truth is under attack, and much is at stake. Christians are caught in the crossfire of alternative Christian histories, emerging faulty texts, and a cultural push to eliminate absolute Truth altogether. As a result, many churches and Christians have been deceived.

Worse still, they propagate the deception that poses itself as Truth! In The Truth War, John MacArthur reclaims the unwavering certainty of God’s Truth and anchors Christians in the eternal, immovable promises that are found in His Word.

Fighting for Christianity in an Age of Deception

As John MacArthur reveals in The Truth War: Fighting for Christianity in an Age of Deception, truth is under attack, and much is at stake. Perhaps no one in America is more passionate than John MacArthur about exposing those who are mounting this attack―especially those bringing the assault right into the church.

There is no middle ground―no safe zone for the uncommitted in this war. The battle for truth is raging, and this book reveals:

“[The postmodern age] is the age of no truth, an age that has reached a point of deadly fatigue when it comes to facing the truth―a generation that no longer believes truth can be known. Dr. John MacArthur knows better, and he is armed with the courage to confront this age with a bold defense of truth. . . . His argument is compelling, his defense of truth is brilliant, and his concern for the church is evident on every page. The evangelical church desperately needs this book, and it arrives just in time.” ―R. Albert Mohler Jr., President, The Southern Baptist Theological Seminary

Introduction: Why Truth is Worth Fighting For

Appendix: Why Discernment is Out of Fashion

John MacArthur has served as the pastor-teacher of Grace Community Church in Sun Valley, California, since 1969. His ministry of expository preaching is unparalleled in its breadth and influence. In more than four decades of ministry from the same pulpit, he has preached verse by verse through the entire New Testament (and several key sections of the Old Testament). He is president of the Master’s University and Seminary and can be heard daily on the Grace to You radio broadcast (carried on hundreds of radio stations worldwide). He has authored a number of bestselling books, including Twelve Ordinary Men, and One Perfect Life.