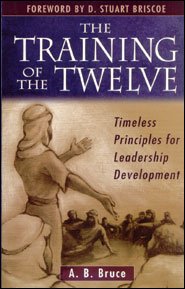 The Training of the Twelve: Timeless Principles for Leadership Development (A. B. Bruce)

For over 100 years this has been a highly regarded and wide received work that continues to speak powerfully to a current generation of Christian leaders, and those who would be serious disciples. The methods Jesus used to prepare His disciples have never lost their relevance; they are the inspiring model for training and equipping leaders or any disciple for service.

The Training of the Twelve

For over 100 years, The Training of the Twelve has been a highly regarded and wide received work that continues to speak powerfully to a current generation of Christian leaders, and those who would be serious disciples. The methods Jesus used to prepare His disciples have never lost their relevance; they are the inspiring model for training and equipping leaders or any disciple for service.

“I have often read chapters of this book for no other reason than that, I personally needed the nourishment that comes to me only from devotional application.” — Dr. Stuart Briscoe

“The pre-eminent work on the association of Christ with His disciples.” — Wilbur Smith

Alexander Balmain Bruce (1831–1899) was a Scottish churchman and theologian. He was a minister of the Free Church of Scotland. He was born at Aberargie near Perth, Scotland. His father suffered for his adherence to the Free Church at the Disruption of 1843, and moved to Edinburgh, where Alexander was educated, showing exceptional ability from the first. His early religious doubts, awakened especially by David Strauss’s Life of Jesus, made him throughout life sympathetic with those who underwent a similar stress.

After serving as assistant first at Ancrum, then at Lochwinnoch, he was called to Cardross in Dumbartonshire (now Dunbartonshire) in 1859, and to Broughty Ferry in 1868. There he published his first notable exegetical work, The Training of the Twelve. In 1874 he delivered his Cunningham Lectures, afterwards published as The Humiliation of Christ, and in the following year was appointed to the chair of Apologetics and New Testament exegesis at the Free Church College, Glasgow, a post he held for 24 years.

He was one of the first British New Testament scholars whose work was received favorably in Germany. The character and work of Christ were, he held, the ultimate proof and the best defense of Christianity; and his tendency was to concentrate attention somewhat narrowly on the historic Jesus. In The Kingdom of God (1889), which first encountered serious hostile criticism in his own communion, he accounted for some of the differences between the first and third evangelists on the principle of accommodation–maintaining that Saint Luke had altered both the text and the spirit of his sources to suit the needs of those for whom he wrote. It was held that these admissions were not consistent with the views of inspiration professed by the Free Church of Scotland.

When the case was tried, the assembly held that the charge of heresy was based on a misunderstanding, but that by want of due care in his mode of statement he had given some ground for the painful impressions which had existed. Bruce rendered great service to his own communion in connection with its service of praise. He was convener of the committee which issued the Free Church hymn book, and he threw into this work the same energy and catholicity of mind which marked the rest of his activities.