View cart “How Prayer Impacts Lives (Catherine Mackenzie)” has been added to your cart.
Sale! 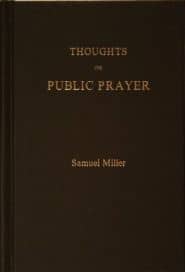 The classic treatment on public prayer, both for those who lead prayer meetings and those who attend them. Also includes a brief biography of Samuel Miller.

The classic treatment on public prayer, both for those who lead prayer meetings and those who attend them. Also includes a brief biography of Samuel Miller.

Samuel Miller wrote in the early 1800s, but his observations about prayer meetings or public prayer in general (as offered by church leaders), is as relevant today as it was over a century and a half ago.  His earnest call for prayer to be well thought out, considerate of others with whom we are praying, and most importantly, from the heart rather than merely in formalities is invaluable.  Every pastor would enhance his ministry significantly by reading this volume.

Samuel Miller was born in Dover, Delaware, on October 31, 1769. He attended the University of Pennsylvania, and was a graduate, in 1789. He was ordained by the presbytery of New York, in 1793. Miller served two different Presbyterian congregations in New York City from 193 until 1813. In 1813, he was called to become the second professor at the new Presbyterian Seminary, at Princeton, New Jersey, a post he would occupy until his death.

After teaching ecclesiastical history and church government for 36 years, he died shortly after being made professor emeritus, January 7, 1850. Miller was a prolific author, penning many books and articles on Presbyterianism and its history. His early involvement in controversies over church government had been one of things that brought him to the attention of his brethren and recommended him for the fledgling seminary.