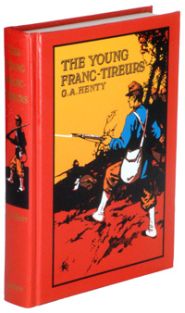 The Young Franc-Tireurs: A Tale of Their Adventures in the Franco-Prussian War (1870) (G. A. Henty)

This was one of Henty’s earliest books, based on his experiences as a correspondent and from personal interviews with several French veterans. The two heroes in this story, Ralph and Peter Barclay, join the French forces during the Franco-Prussian War.

A Tale of Their Adventures in the Franco-Prussian War

This was one of Henty’s earliest books, based on his experiences as a correspondent and from personal interviews with several French veterans. The two heroes in this story, Ralph and Peter Barclay, join the French forces during the Franco-Prussian War. When the conflict has begun, they see heavy action against the Prussians, and end up entering Paris in disguise, swimming the Seine River, and even escape from Paris in a balloon.

Much background to the same war is explained in Henty’s other book, A Woman of the Commune. The humiliation of this defeat in 1870 lingered in the memory of the French for an entire generation and had not yet left their minds at the outset of World War I in 1914.