View cart “Winning His Spurs (G. A. Henty audiobook, read by Jim Hodges)” has been added to your cart.
Sale! 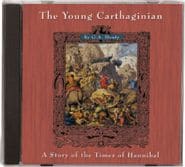 Hannibal presses on despite formidable geographical barriers and the corrupt leadership in Carthage which time and again undermined all his efforts. Malchus, Hannibal’s cousin, participates in many historic battles and has his own adventures, finally settling in Gaul with his new bride.

Hannibal presses on despite formidable geographical barriers and the corrupt leadership in Carthage which time and again undermined all his efforts. Malchus, Hannibal’s cousin, participates in many historic battles and has his own adventures, finally settling in Gaul with his new bride.

Boys will enjoy reading the history of the Punic Wars (circa 200s B.C.) and develop a keen appreciation of the merits of a contest that was at first a struggle for empire, and afterwards for existence, on the part of Carthage. Hannibal, a creative and skillful general, crossed the Alps using elephants, and defeated the Romans at Trebia, Lake Trasimenus, and Cannae, and all but took Rome. It would be difficult to find a more exciting setting for this historic tale of adventure.

The hero of the story is Malchus, a Carthaginian aristocrat, who gets mixed up in a plot which occasions his leaving Carthage to join Hannibal in Spain. He crosses the Alps with the army and fights the Romans with sword and spear, up close and personal, in each major battle. He escapes a dungeon in Carthage and the mines of Sardinia to, in the end, marry a Gaulish maiden and settle in Germany, out of reach of Roman vengeance.
Date: 220 B. C.
Location: North Africa
Main Event: Hannibal’s Campaigns