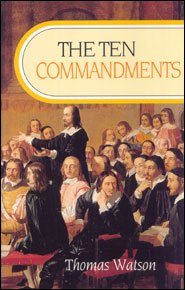 Watson was one of the most popular preachers in England during the Puritan era, and even to read him 300 years later, it’s easy to see why. His writings are abundantly clear, full of fascinating illustration, quick wit and spiritual wealth untold.

Watson was one of the most popular preachers in England during the Puritan era, and even to read him 300 years later, it’s easy to see why. His writings are abundantly clear, full of fascinating illustration, quick wit and spiritual wealth untold.

In this book Thomas Watson continues his exposition of the Shorter Catechism drawn up by the Westminster Assembly. Watson was one of the most popular preachers in London during the Puritan era. His writings are characterized by clarity, excellent, illustration, and spiritual richness.

There are few matters about which the Puritans differ more from present-day Christians than in their assessment of the importance of the ten commandments. The commandments, they held, are the first thing in Christianity which the natural man needs to be taught and they should be the daily concern of the Christian to the last.

In The Ten Commandments Watson examines the moral law as a whole as well as bringing out the meaning and force of each particular commandment. In view of the important function of the law in Christian life and evangelism this is a most valuable volume.

This may be the most readable and important exposition of the Ten Commandments ever written, bringing out the meaning and application of each commandment with great depth and insight. ‘One of the most precious of the peerless works of the Puritans, and those best acquainted with it prize it most.’ — C. H. Spurgeon

Thomas Watson (1620-1686) was rejected from his pastorate with the Act of Uniformity in 1662. He continued to preach in private whenever he had the opportunity. In 1666, after the Great Fire of London, Watson prepared a large room for public worship, welcoming anyone who wished to attend. After the Declaration of Indulgence took effect in 1672, Watson obtained a license for Crosby Hall, Bishopsgate, which belonged to Sir John Langham, a patron of nonconformists. Watson preached there for three years before Stephen Charnock joined him. They ministered together until Charnock’s death in 1680.

Watson kept working until his health failed. He then retired to Barnston, in Essex, where he died suddenly in 1686 while engaged in private prayer. He is buried in the same grave as his father-in-law who served as a minister at Barnston. Watson’s works – several of which have been republished by the Trust – are a legacy that have continued to be a blessing to those who love sound, heart-searching exposition of the Scriptures.