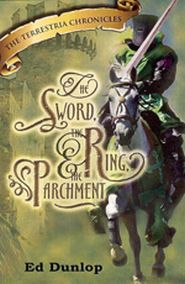 The Sword, the Ring, and the Parchment (Terrestria Chronicles, Book 1)

Young Josiah is a slave to Argamor, the powerful warlord who has plans to seize the throne from King Emmanuel. When Josiah fails in his attempt to escape slavery, Emmanuel not only sets him free forever, but adopts him into the Royal Family. The story presents an unforgettable picture of our salvation and reminds the reader what a wondrous thing it is to be redeemed.

Alive with fast-paced action in a medieval setting, Book 1 of the Terrestria Chronicles series encourages the reader to live as a child of the King.

The Sword, the Ring, and the Parchment

Young Josiah is a slave to Argamor, the powerful warlord who has plans to seize the throne from King Emmanuel. When Josiah fails in his attempt to escape slavery, Emmanuel not only sets him free forever, but adopts him into the Royal Family. The story presents an unforgettable picture of our salvation! It shows the reader what a wondrous thing it is to be redeemed. Alive with fast-paced action in a medieval setting, Book 1 of the Terrestria Chronicles allegory series encourages the reader to live as a child of the King.

In today’s world it’s hard to find good, wholesome reading material for your family. These are well-written books that cause your children to grow in the Lord. Books that challenge them to serve Him with all their hearts.

Purpose of the Series

The Terrestria Chronicles allegory series was written with a three-fold purpose: to honor Jesus Christ as King. To challenge young readers to love and serve Him. And to teach them to guard their hearts for Him. The focus of the series is always on the King.

Fast-paced action – powerful imagery – heart-pounding adventure!  These life-changing books are captivating and once you start reading, you’ll find them hard to put down. This adventure series has a particularly strong appeal to today’s young people: it’s a series with knights and castles, dragons and princesses. But these are books in which every page points to truths of the Christian walk. Biblical doctrines and character principles are taught in such a compelling, fascinating way that they will stay with the reader for a lifetime.

Written for ages ten and up, the Terrestria Chronicles series are ideal for family devotions, classroom use, or individual enjoyment. So grab your sword and take your family on a quest to Terrestria! Your heart will be challenged to serve the King of kings.

Ed Dunlop has worked in children’s ministries full-time for more than thirty-five years. As an evangelist, he conducts Family Crusades in local churches, presents teacher-training seminars, and speaks at junior camps. Ed also conducts drug and alcohol awareness programs in public schools. He is married with three children. Ed encourages fathers to read this set aloud with their family.  Concerning the Terrestria series, Ed comments: “I wept as I wrote some of the early chapters.  I was overwhelmed as I thought about what it really means to be a slave and what a wondrous thing it is to be set free.”

Review from The Old Schoolhouse Magazine

I was very excited to have a chance to read and review this series of Christian allegory fiction. I’m always looking to share with my kids some good books that explain, on their level, the story of what it means to be a Christian and what Jesus did for us by dying on the cross. I have found that in The Terrestria Chronicles!

When these books arrived at my home, my 13-year old daughter grabbed them and headed to her room to read them. She is a fast reader and emerged a few days later telling me that she really liked the series and thought that I would, too. It took me a lot longer than a few days to read the series, but they were hard to put down once I got started!

The series centers around a medieval theme of knights, princesses, castles, etc. Christ is King Emmanuel and the King saves the main character, Josiah, from Argamor (Satan) in the first book. After Josiah is brought into the Kingdom of Terrestria, he is mentored by Sir Faithful and learns what it means to be a son of the King. In each book, Josiah undergoes various trials and learns about faith, the power of his King, and that he cannot rely on his own power to gain success. In the third book, The Search for Everyman, two more main characters are introduced: Prince Selwyn and his sister, Princess Gilda. They aid Josiah in his many adventures throughout the rest of the series.

One aspect of the books that I really liked was the naming of many of the many peoples and places Sir Wisdom, the Path of Righteousness, the Castle of Faith, Captain Temptation, Woebegone, Discouragement and so on. The series is written for ages 10 and up. Some younger readers won’t know the definition of some of these names. But they will get a general understanding of their meanings after reading through these books!

The Biblical principles that are taught in this book are sound. I found the allegories in each story helpful in showing me a new way to look at the lessons in the Bible. I don’t want to give any specific examples, but I loved the way that the author takes modern day items and ideas and shows how they are Satan’s tools for trying to draw us away from our Lord. We are encouraged over and over again to make Christ our first priority and shown the value of doing so.

My favorite book was The Great War which tells the story of the book of Revelation in terms that a child can understand. It is the final book in the series and depicts the greatness of our King, leaving a lasting impression. I thought about this book for several days afterwards. I plan to read this series with my son as his Bible study during our upcoming school year.

We will go through one book monthly, reading and discussing each story and learning more about our King of kings and Lord of lords! I know that he will be enraptured by the fantasy setting and able to identify with Josiah. I have read a modified children’s version of The Pilgrim’s Progress with my children. But I believe that The Terrestria Chronicles are much easier to understand while getting many of the same points across to the reader. They are definitely more action-packed!

I highly recommend this series for all families. It will open up a whole new world of understanding of what it means to be a son or daughter of our wonderful King!

– Product Review by Kris Price, Assistant to the Publishers, The Old Schoolhouse Magazine

Be sure to also see the companion series, Kingdom Tales from Terrestria.