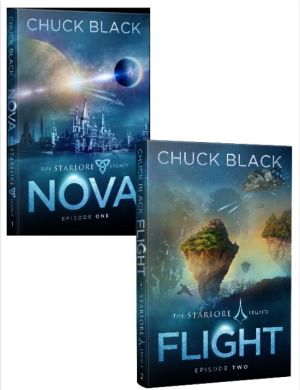 The first 2 Episodes of The Starlore Legacy –

Chuck Black, renowned author of The Kingdom Series and other thrilling biblical allegories, is back to writing with a new series: The Starlore Legacy.  With plans for 12 volumes to come, two are now available and we will add each successive volume to the series as they come into print.

A mighty empire…a lowly slave…a galaxy to save. Will a hero rise?

Nova chronicles the early years of the galaxy after the great war between two immortal races known as the Malakians and the Torians. The despot, Zari Treville, is leading the Torians on a campaign to rule the galaxy, but Supreme Chancellor Ell Yon, leader of the Malakians, stands in his way. Both races have technology that mankind can’t begin to understand or even imagine.

But who dares face the wrath of a powerful tyrant?

Daeson seeks the counsel of the oracle that propelled him into a life of ruin and terrifying adventure. But the ruthless Chancellor Lockridge offers no quarter to his life-long friend turned traitor. Lockridge’s thirst for revenge spills the blood of thousands of innocent Rayleans, and Daeson bears the burden of global calamity. Rejected by all except the spirited Raviel, Daeson struggles to carry on.

When the whispers of the Immortal Ell Yon beckon Daeson to a remote moon of the planet Mesos, he must find the courage to face his deepest fears. Can Daeson trust the words of an ancient Immortal and inspire the slaves of Jypton to rise up? Not only does the future of his people hang in the balance, but the entire galaxy as well!