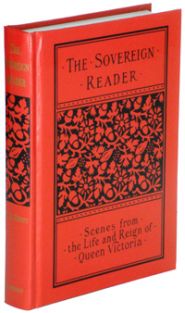 The Sovereign Reader: Scenes from the Life and Reign of Queen Victoria (G. A. Henty)

Scenes from the Life and Reign of Queen Victoria

George Alfred Henty, better known as G.A. Henty, began his storytelling career with his own children. After dinner, he would spend and hour or two in telling them a story that would continue the next day. Some stories took weeks! A friend was present one day and watched the spell-bound reaction of his children suggesting Henty write down his stories so others could enjoy them. He did. Henty wrote approximately 144 books in addition to stories for magazines and was known as “The Prince of Story-Tellers” and “The Boy’s Own Historian.” One of Mr. Henty’s secretaries reported that he would quickly pace back and forth in his study dictating stories as fast as the secretary could record them.

Henty’s stories revolve around fictional boy heroes during fascinating periods of history. His heroes are diligent, intelligent, and dedicated to their country and cause in the face, at times, of great peril… Henty’s heroes fight wars, sail the seas, discover land, conquer evil empires, prospect for gold, and a host of other exciting adventures. Along the way, they meet famous personages… In short, Henty’s heroes live through tumultuous historic eras meeting leaders of that time. Understanding the culture of the time period becomes second nature as well as comparing/contrasting the society of various cultures.