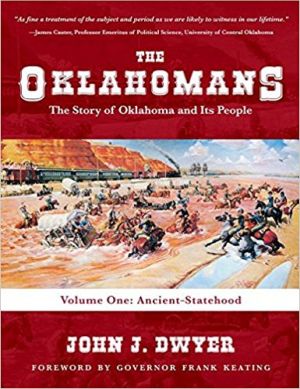 The Oklahomans: The Story of Oklahoma and Its People (Vol 1: Ancient – Statehood) (John J. Dwyer)

The unforgettable saga of America’s last frontier-the Oklahoma Country. Never has the story of this great land and people been told like John J. Dwyer does it. Storybook, history book, coffee table book.

Featuring the same colorful and readable format that has helped make his The War Between the States: America’s Uncivil War a success, The Oklahomans (Volume 1, Ancient-Statehood) chronicles the saga of the winning-and losing-of a land. Some of the most famous cowboys, Indians, lawmen, outlaws, and explorers in American history stride across the pages of this unforgettable story. So do some of the country’s greatest entrepreneurs, statesmen, Christian ministers, social pioneers, and athletes.

The Story of Oklahoma and Its People, Volume 1

The unforgettable saga of America’s last frontier-the Oklahoma Country. Never has the story of this great land and people been told like John J. Dwyer does it. Storybook, history book, coffee table book.

Featuring the same colorful and readable format that has helped make his The War Between the States: America’s Uncivil War a success, The Oklahomans (Volume 1, Ancient-Statehood) chronicles the saga of the winning-and losing-of a land. Some of the most famous cowboys, Indians, lawmen, outlaws, and explorers in American history stride across the pages of this unforgettable story. So do some of the country’s greatest entrepreneurs, statesmen, Christian ministers, social pioneers, and athletes.

“This attractively designed history of the Sooner state is sure to provide even the most serious scholar information not previously known. I could not recommend it more highly.” –Loren Gresham, President, Southern Nazarene University

“An incredible trove of maps and drawings and visuals of all kinds, vivid and colorful. John Dwyer has written a wonderful story.” –Frank Keating, former Governor of Oklahoma, from the foreword

“Engaging reading and new imagery I’ve not seen before. I am enthralled with what Dwyer has accomplished.” –William D. Welge, Director, Office of American Indian Culture and Preservation, Oklahoma Historical Society

“John Dwyer has done a magnificent job of expressing the essence of the Oklahoma spirit, but has done so in a captivating and interesting manner.” –Mike E. O’Neal, President Emeritus, Oklahoma Christian University, and Chancellor, University of Rwanda

“As fine a treatment of the subject and period as we are likely to witness in our lifetime.” –James Caster, Professor Emeritus of Political Science, University of Central Oklahoma

“A remarkable book. The difference between Dwyer and other historians is that he doesn’t just tell what happened, he shows why people did what they did. Every generation of Oklahomans needs their own recounting of Oklahoma history. This is ours.” –Bob Blackburn, Executive Director, Oklahoma Historical Society

“To undertake such a task of compiling an accurate history of a people or land spanning centuries is a daunting task. To do so in a manner that is not only factual, but also enjoyable to read is another matter altogether. With precise detail and compelling story-telling enhanced by beautiful illustrations, informative maps and priceless photographs, John J. Dwyer presents the inspiring story of Oklahoma and its people in the first volume of The Oklahomans. –Tulsa World

Novelist and Oklahoma native Ralph Ellison said, “You have to leave home to find home.”  It’s an apt description of the journey of John Dwyer, author and general editor of The Oklahomans. The Dwyer family roots were firmly transplanted from Ireland to Oklahoma by John’s great-grandfather and grandfather.  The latter settled in Oklahoma City in 1909, just two years after Oklahoma achieved statehood. Although born in Dallas, TX, John was relocated to Oklahoma when his widowed mother returned to her home when he was two years old.

It would be on Oklahoma soil that his mother instilled in him his love for history.  Coupled with his unusually creative imagination, it soon became apparent that John not only liked to hear great stories of legend and history, but to make up his own as well. It would be out of a sense of divine purpose that he would use that creativity in response to a higher calling in the years to come.

John began a career in journalism during his high school days when he served in a variety of roles, including news and sports reporter, for the Duncan Banner, a daily newspaper in his small Oklahoma hometown. He was the youngest sports editor in the newspaper’s history by the time he attended the University of Oklahoma on a journalism scholarship. He graduated in 1978 with a bachelor of arts and sciences degree in journalism.

Dwyer further developed his journalistic skills in radio as a play‐by‐play football and basketball announcer for several radio stations. He won the coveted position of sports director for the University of Oklahoma’s 100,000 watt KGOU‐FM radio station. For seven years, he provided live, on‐air reports to America’s largest radio networks of University of Oklahoma college football games.

Except for a year in England during 6th grade, John lived in the Sooner State for 28 years before returning to Dallas in 1986 to attend Dallas Theological Seminary where he earned his Master of Biblical Studies. While there, Dwyer worked part time on the sports staff of The Dallas Times Herald, which at the time owned one of the five largest circulations of any daily newspaper in Texas. It was in Texas that he also met and married his wife Grace in 1988 and settled down to start his family.

In the spring of 1992, Dwyer and his wife founded the Dallas‐Fort Worth Heritage newspaper, which would grow to a circulation of 50,000 per month at the time of its sale, after nearly a decade, to new owners. The Heritage pioneered innovative features such as full color photography and graphics, an expansive web site, a cluster of informative daily radio programs, and an aggressive, uncompromising brand of investigative news reporting unprecedented for contemporary news publications holding an
orthodox Christian worldview.

In 2006, at the urging of his family and the Oklahoma Historical Society, John returned to Oklahoma to tackle the colossal task of writing “The Oklahomans,” which was endorsed as an official project of the Oklahoma Centennial Commission. He has completed volume 1 (Ancient‐Statehood) and a portion of volume 2 (Statehood‐Present), which releases in November 2018.

John is now in his eleventh year as Adjunct Professor of History and Ethics at Southern Nazarene University. He is former history chair at Coram Deo Academy, near Dallas, Texas. His books include the non‐fiction historical narrative “The War Between the States: America’s Uncivil War” (Western Conservatory), the novel “When the Bluebonnets Come” (Bluebonnet Press), the historical novels “Stonewall” and “Robert E. Lee” (Broadman & Holman Publishers), and the upcoming historical novels “Shortgrass” and “Mustang” (Oghma Creative Media).

John and Grace have one daughter and one grandson and live in Norman, Oklahoma. They are members of the First Baptist  Church of Norman, where they serve in a variety of teaching, mission, and other ministry roles.