View cart “The Puritan Hope: Revival and the Interpretation of Prophecy (Iain Murray)” has been added to your cart.
Sale! 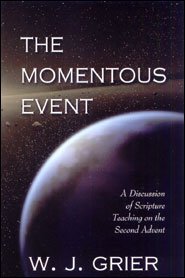 The Momentous Event: A Discussion of Scripture Teaching on the Second Advent (W. J. Grier)

The best brief presentation of the Amillennial (or non-millennial) position regarding the last things, or doctrines known as eschatology.  Careful attention is given to the teaching found in the gospels, then the Epistles and Revelation, with special attention on the significance of the millennium of Revelation chapter 20.

A Discussion of Scripture Teaching on the Second Advent

The best brief presentation of the Amillennial (or non-millennial) position regarding the last things. Attention is given to the teaching found in the gospels, then the Epistles and Revelation, with special attention on the significance of the millennium of Revelation chapter 20.

Grier sets forth, in orderly and eminently readable fashion, what most Calvinistic teachers believe concerning the Second Advent and questions related to it.  With orthodox Christians of every age, the author holds that our Lord’s return will be personal, visible, sudden and unexpected, glorious and triumphant.

Of the three views titled post-millennialism, pre-millennialism and non-millennialism, Grier advocates the last of those as the scriptural option, and shows that it has been maintained by a large majority of the Fathers and Reformers of the Church. In two valuable chapters dealing with the interpretation of prophecy, he points out that the literalist view leads logically to absurdities and is not adopted by the writers of the New Testament, who specifically state that many of the Old Testament predictions have been fulfilled, albeit in a spiritual sense.

A general consideration of New Testament teaching on the subject, is followed by a more detailed review of the doctrine of the Gospels, Epistles and Apocalypse, special attention being devoted to the significance of the “millennium” of Revelation chapter 20. Here is a book that will well repay study by those who seek to understand truth that is basic to Christian faith and hope’.

“The best book for its size on eschatology, on end-time matters. Still highly recommendable. One of my favorite books.” — Derek Thomas

William James (Jim) Grier was born on 18 November 1902 and grew up on a farm in County Donegal, Ireland. As a Classics student at Queen’s University Belfast, he was converted through the witness of a Christian student friend and in a W. P. Nicholson mission meeting. He was a foundation member of the university’s Christian Union. Then he studied theology under Gresham Machen and Geerhardus Vos at Princeton Seminary, 1923-25.

He retired in 1979 after a ministry of almost 52 years and went to be with the Lord in 1983. He was the author of many booklets and the books The Momentous Event and The Life of John Calvin.