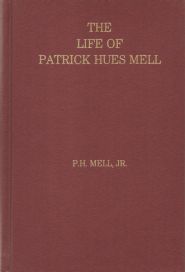 The Life of Patrick Hues Mell

Biography of a 19th century pastor and educator, by his son P.H. Mell, Jr.

The Life of Patrick Hues Mell

Patrick Hues Mell was one of the most influential educators and ministers in 19th century Georgia. For almost fifty years he served as professor of ancient languages and chief administrator at Mercer University and the University of Georgia and he was also a prominent leader in the Southern Baptist and Georgia Baptist conventions. His greatest influence as a moderator of numerous religious and educational assemblies earned him the designation “prince of parliamentarians.”

Born in 1814, Mell received his education from local academies until his entrance into Amherst College in Massachusetts in 1833. He left Amherst two years later and served as teacher and administrator in various schools in the North before arriving at Emory College (which came to be later named Emory University) in Oxford, Georgia. In 1841 Mell joined the faculty at Mercer University, Penfield, as professor of ancient languages. In 1856 he took a similar position at the University of Georgia, Athens, becoming that school’s vice chancellor in 1860. From 1878 to 1888 he was the chancellor of the university.

A lay leader of Georgia Baptists, Mell figured largely in all aspects of Southern Baptist life.  As a parliamentarian he was the moderator of the Georgia Baptist Association (1855-87), president of the Georgia Baptist Convention (1857-87), and president of the Southern Baptist Convention (1863-71, 1880-87).  He served as pastor of the Baptist church at Greensboro for ten years and led the congregations at Bairdstown for 30 years and Antioch for 26 years.
He wrote the books Baptism in Its Mode and Subjects; Corrective Church Discipline; A Manual of Parliamentary Practice; and The Doctrine of Prayer. He also wrote articles and tracts on the subjects of slavery and predestination.
Mell and his wife had eight children, and due to her untimely death, he was left in the care of them alone for much of  his later life.  He died in January 1888.