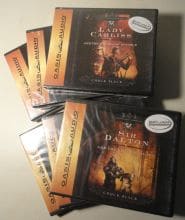 The Knights of Arrethtrae: Set of 6 Audio CDs (Chuck Black)

The complete Knights of Arrethtrae series – all six (6) volumes on audio CD! Almost 30 hours of play time. Includes all the following CDs:
* Sir Kendrick and the Castle of Bel Lione
* Sir Bentley and Holbrook Court
* Sir Dalton and the Shadow Heart
* Lady Carliss and the Waters of Moorue
* Sir Rowan and the Camerian Conquest
* Sir Quinlan and the Swords of Valor

The complete Knights of Arrethtrae series – all six (6) volumes on audio CD! Almost 30 hours of play time. Includes all the CDs titled and described below:

Book 1: Sir Kendrick and the Castle of Bel Lione

A dangerous new order threatens the mission of the Knights of Arrethtrae. Only loyalty to the King can bring victory! As the Knights of the Prince await His triumphant return, they are steadfast in their mission to take His story into the kingdom and recruit as many as are willing. But when a new and dangerous threat is revealed, their mission is jeopardized.

Sir Kendrick and his young charge, the impetuous Sir Duncan, are sent on a mission to discover the identity and origin of a secretive new order known as the Conquistero Knights.

Sir Bentley, an honorable young knight, abandons his calling in order to seek the truth of the Prince. Choosing to live as the Prince did, he forsakes his former lifestyle and wealth to live as a pauper. His travels take him to Holbrook, where the townsfolk live in poverty, paying high taxes to support the lavish lifestyle of Lord Kingsley and his court. But something even darker is lurking in the shadows of the beautiful castle.

Sir Dalton, a knight in training, seems to have everything going for him. Young, well-liked, and a natural leader, he has earned the respect and admiration of his fellow knights, and especially the beautiful Lady Brynn.

But something is amiss at the training camp. Their new trainer is popular but lacks the passion to inspire them to true service to the King and the Prince. Besides this, the knights are too busy enjoying a season of good times to be concerned with a disturbing report that many of their fellow Knights have mysteriously vanished.

When Sir Dalton is sent on a mission, he encounters strange attacks, especially when he is alone. As his commitment wanes, the attacks grow in intensity until he is captured by Lord Drox, a massive Shadow Warrior. Bruised and beaten, Dalton refuses to submit to evil and initiates a daring escape with only one of two outcomes–life or death. But what will become of the hundreds of knights he’ll leave behind? In a kingdom of peril, Dalton thinks he is on his own, but two faithful friends have not abandoned him, and neither has a strange old hermit who seems to know much about the Prince. But can Dalton face the evil Shadow Warrior again and survive?

Book 4: Lady Carliss and the Waters of Moorue

Determined, smart and a master of both the sword and the bow, Lady Carliss has proven herself as a veteran Knight of the Prince. Returning from a mission of aid, Carliss is plunged into adventure once again as she searches for the marauders responsible for kidnapping a friends’ family. Along the way she is reunited with Sir Dalton and discovers that the struggle in her heart is far from over. When Dalton falls to the vicious attack of a mysterious, poisonous creature, Carliss finds herself in a race against time. As Dalton clings perilously to life, she must find the antidote in the distant and strange city of Moorue.

Book 5: Sir Quinlan and the Swords of Valor

Two friends face the Dark Knight’s deadliest scheme, but only one knight has the courage to overcome.

Sir Quinlan leaves his boyhood friend to serve the Prince, fighting a battle darker and more intense than any he’s ever known. The mysterious Sir Baylor recruits him into the ranks of an elite unit of knights known as the Swords of Valor, but when tragedy strikes and everyone blames Quinlan, the Swords of Valor disband, ending a legacy of heroic deeds.

Alone and despairing, Quinlan wanders the kingdom, fleeing his past. His providential encounter with Taras, a mysterious Silent Warrior and former trainer of Valor Knights, offers Quinlan a chance to redeem himself and learn the ways of the secret warriors. The training is grueling, and just when Quinlan seems to have left his failures behind, he receives an impossible challenge from the Prince—one that will force him to face his past…and the mighty men who blame him for the tragedy that ruined them.

A knight left for dead. A country on the verge of ruin. And an evil lord rising to conquer.

Sir Rowan is the most decorated tournament knight in Cameria, but when he is attacked and left for dead, his world collapses. Betrayed and lingering at death’s door, only a bizarre vision of his Prince and the help of a woman dedicated to the King keeps him alive. As Rowan heals, he finds new purpose in life through service to his King.

But his beloved land of Cameria has fallen victim to the tyranny of the Dark Knight.

Rowan’s countrymen need his help taking their cities back from the enemy, but all is not as it appears. The mysterious Sir Lijah insists Rowan’s purpose lies elsewhere—far away from Cameria, in an ancient city and for an ancient cause.

Rowan’s destiny is greater than he ever imagined. The final battle with the Dark Knight approaches, and he must choose where he will fight. Will he discover his true identity and purpose as a Knight of the Prince, or will the Dark Knight claim victory for eternity?

“Chuck Black is a word crafter who is able to weave Kingdom principles into the fabric of one’s moral imagination. The characters he has created and the passions they exude will motivate readers to follow their examples, which have now been etched into their awakened conscience.”  —Mark Hamby, founder and president of Cornerstone Family Ministries and Lamplighter Publishing

“With sanctified imagination, Chuck Black transports readers back to the days of chivalry and valor, clashing steel, and noble conflict–but ultimately he transports readers to the eternal triumph of the King who reigns!”
– Douglas Bond, author of Hold Fast In a Broken World, and numerous works of historical fiction.