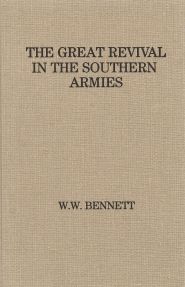 The Great Revival in the Southern Armies (William W. Bennett)

The author, himself one of the faithful preachers, chronicles many personal accounts of the power of God which was known throughout the ranks of the armies of the Confederacy during the War Between the States.

The Great Revival in the Southern Armies

The author, himself one of the men who faithfully preached the gospel during the War, chronicles many personal accounts of the power of God experienced throughout the armies of the Confederate troops during their encampments in the War Between the States.

Books on times of religious awakening often mistake psychological manipulation and emotional excess for real gospel preaching and true repentance and faith. Such is not the case in this wonderful account of the work of the Holy Spirit in the lives of thousands of Confederate soldiers. The Great Revival in the Southern Armies demonstrates beyond doubt that our sovereign God providentially uses some of the worst circumstances, even the awfulness of war, to extend His glorious kingdom through the faithfulness of gospel witness.

Dr. William Woodhull Bennett (1821-1909) served in pastorates in Charlottesville and Richmond, Virginia, as well as Washington D.C.  prior to the War. He also taught briefly at the University of Virginia in 1852, concluding his duties there due to health concerns.  Serving the Confederate troops as a devout chaplain, Bennett believed the southern army camp had truly been “a school of Christ,” where pious generals like Stonewall Jackson and Robert E. Lee led their men both in battles and in prayer meetings. The “moral miracles” that had taken place among Confederate soldiers were nothing short of remarkable. To Bennett, these were the “‘silver lining’ to the dark and heavy cloud” of the South’s defeat.

Bennett wrote: “In the army of General Lee, while it lay on the upper Rappahannock, the revival flame swept through every corps, division, brigade, and regiment.  One chaplain explained: ‘The whole army is a vast field, ready and ripe to the harvest. The susceptibility of the soldiery to the gospel is wonderful, and, doubtful as the remark may appear, the military camp is most favorable to the work of revival. The soldiers, with the simplicity of little children, listen to and embrace the truth. Already over two thousand have professed conversion, and two thousand more are penitent. Oh, it is affecting to see the soldiers crowd and press about the preacher for what of tracts, etc., he has to distribute, and it is sad to see hundreds retiring without being supplied!’

He is buried in Arlington National Cemetery.