Skip to content
View cart “The Role Relationship of Men and Women (George Knight)” has been added to your cart.
Sale! 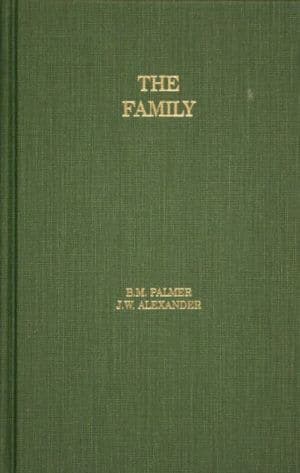 A classic work on the family from the 19th-century, which was much sought after until its recent republication by Sprinkle, to whom we are indebted for restoring this treasure-chest of wisdom. Covers virtually all subjects pertinent to the Christian family.

This volume also includes the well-known Thoughts on Family Worship by J.W. Alexander.

In Its Civil and Churchly Aspects

A classic work on the family from the 19th-century, which was much sought after until its recent republication by Sprinkle, to whom we are indebted for restoring this treasure-chest of wisdom. Covers virtually all subjects pertinent to the Christian family.

About the Author of The Family

Benjamin Morgan Palmer (1818-1902) was born in Charleston, South Carolina and attended Amherst College, 1832-34, taught from 1834-36, attended the University of Georgia in 1838 and Columbia Theological Seminary from 1839-41. He was licensed to preach in 1841 by Charleston Presbytery and ordained in 1842 by Georgia Presbytery. His first pastorate was at the First Presbyterian Church of Savannah, Georgia, 1841-42.  From there he went on to serve the First Presbyterian Church of Columbia, South Carolina as their pastor from 1843-55, and later as a professor at Columbia Theological Seminary from 1853-56.  He assumed the pastoral role of his last church, First Presbyterian of New Orleans, in 1856, serving there until his death in 1902, when he was struck by a street car.

A quote from James W. Alexander, from Thoughts on Family Worship

“In the hurry of our great cities, it is painful to observe the preference given to mammon over God. Look at the living tide which rolls every morning down such a thoroughfare as Broadway! A stranger might be forgiven if he supposed that the life of each breathless banker, merchant, or clerk depended on his reaching the commercial latitudes within a certain minute. But how many of these have prayed with their families? Some, I rejoice to believe; but the mass have no time for anything but the world. Unless men will lose their own souls, and jeopardize the souls of their children, they must take time for God. And the more busy, exhausting, and absorbing any man’s days are, the more he needs the deliberate abstraction of a quiet devotional hour, such as that of family worship.”
-— James W. Alexander