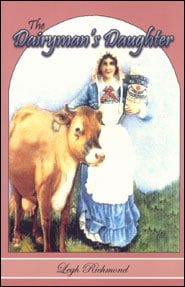 One of the 19th century’s most well-read stories for girls. Over three (3) million copies sold before 1900. Read this once and you’ll wonder why you never heard this story before. Told by her pastor, Legh Richmond, it’s the story of young Elizabeth Wallbridge, who came to be known as “The Dairyman’s Daughter.”

A child of a poor dairy farmer in England, Richmond met Elizabeth in 1798 upon his arrival as the new minister on the Isle of Wight. He learned from her of a proud past in which she forsook all love of her family, but then of the sweet love of Christ which was formed in her and the shining testimony she became as a witness for Him with her holy life. Richmond regarded Elizabeth as “one of the best-versed persons in the Scriptures” whom he had ever met and considered meeting her one of the highest privileges of his life.

What does it take to write a best-seller? The answers aspiring authors receive to that question today differ vastly from those given in days gone by. Thankfully, Grace and Truth Books has reprinted a best-seller of nearly 200 years ago (originally published, 1814). This true story was one of the most popular 19th-century stories for girls ever published. Translated into virtually all European languages, The Dairyman’s Daughter sold more than four million copies in England and the United States combined.

This book tells the true story of young Elizabeth Wallbridge, also known as ‘the Dairyman’s Daughter’. Author Leg Richmond became acquainted with this remarkable young woman when he served as minister in a parish near her home on the Isle of Wight.

Elizabeth, the daughter of a poor dairy farmer, grew up as a woman of the world. Her life prior to knowing Christ, although not immoral, was filled with selfish indulgence and pride. At the age of 26, she heard a sermon that forever changed her life. From that point forward, despite the ill health to which she eventually succumbed at age 31, she devoted her life to godly pursuits.

This book provides its readers with an example of a life of devotion alongside drudgery and piety amidst pain. The winsome nature of the book – and doubtless its best-selling status – comes from Elizabeth’s shining example as a fully devoted follower of Christ, one who lived a quiet, pure life of faith.

In 1828, fourteen years after its publication, the circulation of The Dairyman’s Daughter reached four million copies in 19 languages. Estimates of the conversions it sparked number in the thousands. For several decades, the book’s popularity increased until it became one of the most widely read religious books ever produced.

Although modern readers may find the book’s language a bit older in style, nonetheless it appropriately conveys the heroine’s spiritual focus and lack of interest in worldly matters. The work begins with the brief biographical notes and memoir of the author, but quickly journeys chronologically through his acquaintance with his pious young friend. Readers will learn of her loving witness to her parents, her unselfish giving of herself even in the face of physical pain, and her sweet and submissive acceptance of her heavenly Father’s sovereign will, even unto death.

Read and enjoy this book with your children, perhaps during family devotions or as an addendum to a study of 19th-century literature. Turn its pages and breathe the fresh wind of the Spirit as it blows through the life of a Christ-follower, absent from the body for nearly 200 years, whose voices speaks clearly today. Grow together as you learn from this surprisingly spiritual best-seller.

Legh Richmond (1772–1827) was a Church of England clergyman and writer. He is known for conversion stories, often about the poor or women.  These made him a popular writer among those for whom few books were being written in those times. Richmond was also known for his collection of letters to his children, powerfully encouraging evangelism of youth.  Richmond was strongly influenced by William Wilberforce’s Practical View of Christianity. He also took a prominent interest in the British and Foreign Bible Society, The Church Missionary Society, and the London Society for Promoting Christianity Among the Jews.