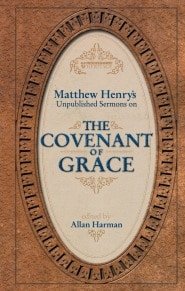 Matthew Henry’s Unpublished Sermons on The Covenant of Grace

Matthew Henry’s commentary on the Bible is legendary. Used by millions, it is a testament to that great Puritan minister’s desire to make the whole Bible and its teaching reach the ordinary man.

50 years ago Allan Harman was given a small, well-worn book of handwritten sermon notes. They were Matthew Henry’s own notes, from sermons preached to his Chester congregation in 1691-92. Harman started turning these long forgotten sermons into this volume – revealing, and deeply spiritual work on that most fundamental of doctrines – God’s promise of Grace.

Matthew Henry’s Unpublished Sermons on the Covenant of Grace

Matthew Henry’s commentary on the Bible is legendary. Used by millions, it is a testament to that great Puritan minister’s desire to make the whole Bible and its teaching reach the ordinary man.  But all attempts to relocate some of Matthew Henry’s unpublished sermons are welcome.  Here is one of those valued collections! – in this instance, on the Covenant of Grace.

50 years ago Allan Harman was given a small, well-worn book of handwritten sermon notes. They were Matthew Henry’s own notes, from sermons preached to his Chester congregation in 1691-92. Harman started turning these long forgotten sermons into this volume.  We now have a revealing, deeply spiritual work on that most fundamental of doctrines – God’s promise of Grace.

Harman filled in the shorthand gaps and has added footnotes to help with obscure passages. He has also translated the Greek, Hebrew and Latin quotes.  A biographical introduction is included to help us understand the context in which these sermons were preached.

Matthew Henry’s delightfully clear style is evident and provides succinct, memorable quotations that will stay with you.

Matthew Henry was born at Broad Oak, Flintshire, in October 1662, into the godly home of Philip and Katharine Henry. This was within two months of his father’s ejection under the Act of Uniformity from ministry in the Church of England. He had one brother, who died at the age of six, and four sisters. When Matthew was only three years old, he could already read the Bible distinctly, and he early showed a strong passion for books. He was educated primarily by his father, with the assistance of tutors.

In 1680 his father took him, aged 18, to the academy of Thomas Doolittle at Hackney, where he studied for two years under Doolittle and Thomas Vincent, until persecution forced the academy to relocate. Henry moved to the estate of Bronington, Flintshire, which he inherited from his maternal grandfather, Daniel Matthews. The next time he returned to London it was to study law, and he was admitted to Gray’s Inn in 1685.

He continued his theological study in private, and began to preach in his father’s neighbourhood in 1686. He moved to Chester the following year, and was asked to become the local minister. The penalties against dissent having been somewhat relaxed, he was privately ordained a minister in London in 1687. Returning to Chester, he began his twenty-five-year ministry of the Presbyterian congregation there. That same year, he married Katherine Hardware of Bromborough, Cheshire; she died in childbirth (James Hamilton in his Life of Matthew Henry, 1847, says it was smallpox) in February 1689, at the age of 25.

The following year, Henry married Mary Warburton, with whom he had one son, Philip, and eight daughters, three of whom died in infancy. Henry saw much success in his Chester ministry – the number of communicants was eventually 350, and a meetinghouse was built for him in Crook Lane, opened in 1700, with a gallery added in 1706. As well as his congregational work, Henry held monthly services in surrounding villages and preached to prisoners in the castle.

Commentary on the Whole Bible

He began work on his famous Commentary on the Whole Bible in 1704, completing it from Genesis to Acts by his death ten years later. Several of his fellow ministers compiled the remainder of the Commentary (Romans to Revelation) primarily from Henry’s own notes and writings. While still at Chester, Henry also completed his A Method for Prayer with Scripture Expressions proper to be used under each head.

As his Commentary began to be published, Henry became increasingly well-known. This resulted in his relocation to Mare Street, Hackney in London in 1712. This gave him opportunities of preaching almost every day of the week, sometimes three times on the same day. It was probably in this way that he accomplished most, for his Hackney congregation was not large. He found only a hundred communicants. It was not a lively period in the history of religion anywhere, and the London churches widely shared the spiritual torpor which soon after his decease transformed the Presbyterian chapel at Chester into a Unitarian meeting-house.

Going Home to the Lord

Revisiting Cheshire in 1714, on Monday, June 21, Henry set out on his return to London. He was engaged to preach at Nantwich on the way. At Tarporley, his horse threw him, but he denied that he had sustained any injury. Accordingly, he preached on Proverbs 31:18; but everyone noticed that he was not so lively as usual. First he showed signs of being quite sleepy.  But he was soon seized with apoplexy, and at eight on the following morning he fell asleep in the Lord. He was buried in the chancel of Trinity Church, Chester.