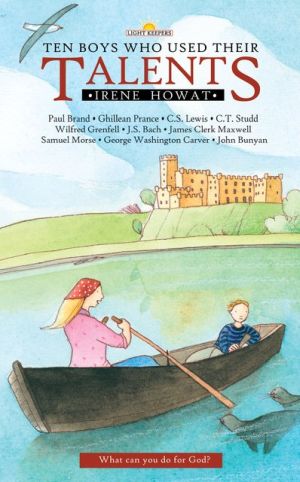 Ten Boys Who Used Their Talents

Ten Boys Who Used Their Talents

Another Ten Boys book in the much-loved Lightkeepers series!

What can you do for God? These ten boys grew up to become useful men who were a blessing to others. Because they used their talents and gifts to the glory of God!  They believed God gave them talents to both serve people and honor Him.

Paul Brand took medicine into new lands to bring hope to the sick.

Ghillean Prance was an innovator in creation studies.

C. T. Studd was a sports star and then went to the missions field.

Wilfred Grenfell was an energetic explorer of the Arctic and taught the gospel to those living there.

Samuel Morse patented many inventions one of which has saved many lives.

John Bunyan was imprisoned to shut him up yet wrote a classic that still speaks today.

James Clerk Maxwell’s faith in God’s ordering of the universe led to key discoveries in science.

And more!  A book loaded with ideas and questions for discussion too, each life is covered in 10 or 12 pages.

Ten Boys Who Used Their Talents includes the lives of:

Other books in Irene Howat’s Lightkeepers Series for boys include:

You can also get all the volumes together, in one Lightkeepers Boxed Set  – which means you’ll have 50 biographies of famous boys!  That boxed set is seen pictured below.

And author Irene Howat aso has a matching set of books by the same titles for girls!