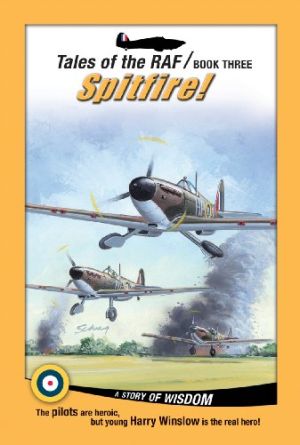 Spitfire! Tales of the RAF

When Hampton Airfield is attacked while the pilots are out on a mission, only Harry knows something that can save the base – and the new Spitfire planes – from destruction. Unfortunately he has been ordered to stay off the base. Orders are meant to be followed, but sometimes it takes wisdom to find a way to warn others, even when they don’t think you should!

Tales of the RAF

When Captain Dawson and his pilots scramble to defend the city of Dover, German planes attack Hampton Airfield.  Luckily, Harry knows something that could save the base from destruction, but he must break the rules in order to tell someone.  Orders are meant to be followed, but sometimes it’s a wise decision to find a way to warn others, even when they don’t think you should!

Join Harry on the airfield when he thundering fighter planes of the 14th Squadron struggle to save Hampton.  Watch the pilots risk their lives to protect their friends and fellow fliers. These are the ordinary people who do extraordinary deeds – the types of accomplishments that make men heroes!

“A great aviation adventure story that should appeal to many boys and girls of today. It is particularly interesting and important that it was written with the background of a very prominent phase in history.” — Squadron Leader Mack Kinsey, retired, Royal Air Force

“Fun to read!  Great for all ages!  Spitfire has airplanes, history, and lots of action, suspense and teamwork – and a lesson in tough decision making.” — Mr. John Clay’s Third Grade Class, 1999

“Spitfire is action packed.  This is a story of love and devotion between the commander, those he commands, and twelve year old Harry Winslow.  Enjoyable reading for all, especially this retired military person!” — Lt. Col. Dick Becker, United States Air Force, retired

Other Volumes in the Tales of the RAF Series

These are the stories of young Harry Winslow and his friendships with the pilots of the Royal Air Force in World War II England. Written for boys but appealing to all, the tales are based on history and depict values such as courage, heroism, and responsibility.