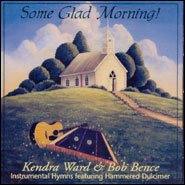 The hammered dulcimer is one of the loveliest instruments ever made; this instrumental collection of hymns is outstanding material for meditation on this collection of hymns, including: I’ll Fly Away; When the Roll is Called Up Yonder; Whispering Hope; and many more! Scroll down to see the full list.

Kendra Ward is a musician, teacher, author and composer with a lifetime of experience in traditional Appalachian arts. She has played the dulcimer since the age of four, learning primarily from her Father and her Grandmother, but also from her constant exposure to the fiddlers, banjo players, dancers and other traditional artists who live in the Appalachian hills she has always called home.

Bob is an award-winning musician who possesses a uniquely bold and powerful guitar style, and a twisted sense of humor. His professional credits include not only festivals and concert halls, but also comedy clubs and improv stages! Bob doesn’t work the comedy clubs any more, but audiences still enjoy his spontaneous wit in concert with Kendra, and at the numerous “emceeing” gigs he gets!

Together Kendra Ward and Bob Bence have earned a reputation as one of the most entertaining and influential traditional music duos in the nation. They have released ten CDs and are the authors of a number of DVDs and instructional books.