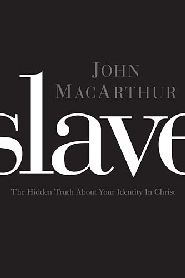 Slave: The Hidden Truth About Your Identity in Christ (John MacArthur)

The Hidden Truth About Your Identity in Christ

Slave: The Hidden Truth About  Your Identity in Christ by best-selling author and pastor Dr. John MacArthur, reveals one crucial word that revolutionizes what it means to follow Jesus.

Throughout the Bible, followers of Jesus are commanded to submit to Him as their King. They are told to obey and follow, faithfully and without hesitation. Every time Christians utter the word Lord, they make a subtle yet profound declaration — that God is their Master and that they belong to Him. In fact, the Bible describes believers as His slaves. They have been bought with a price and now live for Christ as a people for His own possession.

But go into most churches today, even flip through most Bible translations, and you won’t see or hear the word slave anywhere. That’s because it has been lost in translation. In this gripping book, Dr. John MacArthur uses deep Bible teaching and historical evaluation to expertly uncover the one forgotten word that restores the Bible’s definition of true Christian freedom.

What does it mean to be a Christian the way Jesus defined it? MacArthur says it all boils down to one word: Slave. “We have been bought with a price. We belong to Christ. So we are His own possession.”

“Dr. John MacArthur is never afraid to tell the truth and in this book he does just that. The Christian’s great privilege is to be the slave of Christ. Dr. MacArthur makes it clear that this is one of the Bible’s most succinct ways of describing our discipleship. This is a powerful exposition of Scripture, a convincing corrective to shallow Christianity, a masterful work of pastoral encouragement…a devotional classic.”
— Dr. R. Albert Mohler, President, Southern Baptist Theological Seminary

“John MacArthur expertly and lucidly explains that Jesus frees us from bondage into a royal slavery that we might be His possession. Those who would be His children must, paradoxically, be willing to be His slaves.”
— Dr. R.C. Sproul

“Dr. John MacArthur’s teaching on ‘slavery’ resonates in the deepest recesses of my ‘inner-man.’ As an African-American pastor, I have been there. That is why the thought of someone writing about slavery as being a ‘God-send’ was the most ludicrous, unconscionable thing that I could have ever imagined…until I read this book. Now I see that becoming a slave is a biblical command, completely redefining the idea of freedom in Christ. I don’t want to simply be a ‘follower’ or even just a ‘servant’…but a ‘slave’.”
— Rev. Dr. Dallas H. Wilson, Jr., Vicar, St. John’s Episcopal Chapel, Charleston, SC