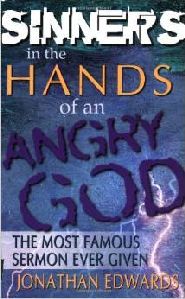 Sinners in the Hands of an Angry God (Jonathan Edwards)

The most famous sermon ever preached in America. Jonathan Edwards preached this July 8, 1741, at the church in Enfield, Connecticut. Widely read for two centuries since, as a prime example of the theology and preaching of Great Awakening times, 1730-1755.

Note: this is a modern English version, with some words and sentence structure altered for today’s readers.

Sinners in the Hands of an Angry God

The most famous sermon ever preached in America. Jonathan Edwards preached this July 8, 1741, at the church in Enfield, Connecticut. Widely read for two centuries since, as a prime example of the theology and preaching of Great Awakening times, 1730-1755.

Most of the sermon consists of Edwards’ “ten considerations” which he poses with strong imagery of the sufferings which those in hell will endure. Those are:

1. There is no want of power in God to cast wicked men into hell at any moment in time.

2. The wicked deserve to be cast into hell: so that divine justice never stands in the way, it makes no objection against God using his power at any moment to destroy them.

3. They are already under a sentence of condemnation to hell.

4. They are now the objects of that very same anger and wrath of God that is expressed in the torments of hell: and the reason why they do not go down to hell at each moment, is not because God, in whose power they are, is not then very angry with them; as he is with many of those miserable creatures that he is now tormenting in hell, and do there feel and bear the fierceness of his wrath.

5. Satan stands ready to fall upon them and seize them as his own, at what moment God shall permit him.

6. There are in the souls of wicked men those hellish principles reigning, that would presently kindle and flame out into hellfire, if it were not for God’s restraints.

7. It is no security to wicked men for one moment, that there are no visible means of death at hand.

9. All wicked men’s pains and contrivance they use to escape hell, while they continue to reject Christ, and so remain wicked men, doesn’t secure them from hell for one moment.

10. God has laid himself under no obligation by any promise to keep any natural man out of hell for one moment.