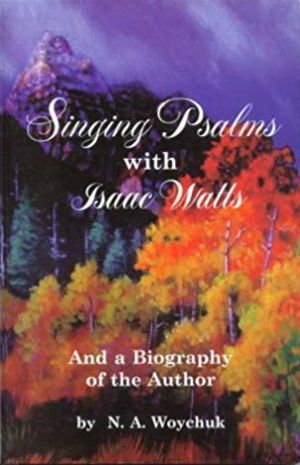 We are delighted to present this selection of the Psalms rendered in the light and in the language of the New Testament. Utilizing a certain meter and rhyme, they were composed by the distinguished hymn writer, Dr. Isaac Watts, over a period of some nineteen years and were intended for use in private and public worship. It may well be that this reprint is the first that has been made on this continent in the last hundred years or more.

And a Biography of the Author

In Watts Park, Southampton, England, stands the statue of Isaac Watts.  It was erected in 1861 as a result of personal gifts.  Made of white marble, it is mounted on a granite pedestal, with three significant sculptured scenes carved into its stone.

On the south side, Watts is depicted instructing a group of children, and the words appear: “He gave to lisping infancy its earliest and purest lessons.”

On the west side, Watts appears with a heavenward glance and his own lines are etched, “To heaven I lift my waiting eyes.”

The east side depicts Watts with a globe, telescope, and hourglass, and a quote from Samuel Johnson is beneath, which reads, “He taught the art of reasoning and the science of stars.”

Finally, at the very base of the statue are these words which Watts penned, which became his rendition and hymn on Psalm 117:

“From all that dwell below the skies, Let the Creator’s praise arise;

Let the Redeemer’s name be sung, Through every land, by every tongue.”

A Biography of Isaac Watts