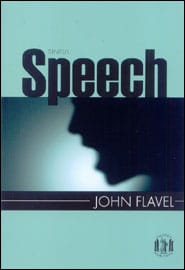 The ancients believed that there were as many sins of the tongue as letters in the alphabet, while the Apostle James described the tongue as “a world of iniquity.” Puritan pastor John Flavel was often grieved by the language used by professing Christians. Here he warns against several forms of sinful speech and points to what he calls the Spirit’s “excellent way to season our words, and keep them sweet and sound.” (Col. 4:6). Another volume in the Pocket Puritan series.

The ancients believed that there were as many sins of the tongue as letters in the alphabet, while the Apostle James described the tongue as “a world of iniquity.” Puritan pastor John Flavel was often grieved by the language used by professing Christians. Here he warns against several forms of sinful speech.  Flavel points to what he calls the Spirit’s “excellent way to season our words, and keep them sweet and sound.” (Col. 4:6). Another volume in the Pocket Puritan series.

Endorsement of the series:

“To read the work of a Puritan doctor of the soul is to enter a rich world of spiritual theology to feed the mind, heart-searching analysis to probe the conscience, Christ-centered grace to transform the heart, and wise counsel to direct the life. This series of Pocket Puritans provides all this in miniature, but also in abundance.”

Other writings by Flavel: