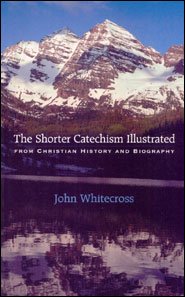 This unusual volume follows the doctrinal structure of the classic Puritan catechism, expanding each doctrinal point not with exposition, but with collected historical stories, chosen by the author from a wide range of sources. Thus such subjects as Providence, Prayer and The Ten Commandments are illuminated with fascinating narratives.

First published in 1828. The author was a schoolmaster and knew well what would gain the attention of the young. Recommended for ages 10 and up. (note: “illustrated” means, in this case, with stories, not with pictures).

From Christian History and Biography

This unusual volume follows the doctrinal structure of the Westminster Shorter catechism, citing each question and answer. But then it goes further: Whitecross expands on each doctrinal point not with exposition, but with collected historical stories, chosen from a wide range of sources. Thus such subjects as The Work of Christ, the Holy Spirit, Providence, Creation, Prayer, The Ten Commandments and the rest of the topics of the Shorter Catechism are illuminated with fascinating stories.

First published in 1828. The author was a schoolmaster who served from the late 1700s into the early 1800s, and he knew well what would gain and hold the attention of the young. Recommended for ages 10 and up. (note: “illustrated” means, in this case, with stories, not with pictures).  It provides a great deal of illustrative material for conversation and instruction.

Some samples from the book:

The punctuality of John Newton, while tide-surveyor at Liverpool, was particularly remarked. One day, however, some business had detained him, and he came to his boat much later than usual, to the surprise of those who had observed his former punctuality. He went out in the boat as heretofore, to inspect a ship, but by some accident the ship blew up just before he reached it; and it appears that, if he had left the short a few minutes sooner, he would have perished with the rest on board.

A young man in America named Stoddart caused his mother much concern, for he lacked all interest in spiritual things. One night the pastor of the chapel which the mother attended saw him outside the building watching the people enter. In a joking and somewhat insolent tone he asked what they were at. “Young man,” said the pastor, “this is what we are at: your mother has asked us to meet tonight to pray for you.”  Young Stoddart walked away saying, “Then if these people are praying about me, it is high time I prayed for myself.”  Before the meeting was over, in he crept, and with great joy the believers heard him say that he thanked them for praying for him and desired also to pray for himself.  The Lord made him a preacher, one sermon that he preached being the prelude to a great revival.