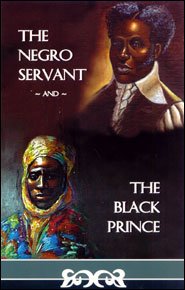 1 copy reduced in price due to minor shelf wear and bent corner.

Two 19th century stories of lasting value, combined for the first time in one volume. Each tells of the work of the grace of God in the lives of young men. One, born into royalty (The Black Prince) comes to know and love Christ.

The other, living in slavery (The Negro Servant) comes to know the same Savior.

But what different plans God has for each of their lives! Holding the power of royalty will not prevent God from humbling us, if He wills, and being enslaved will not hinder Him from exalting us, if that is His plan.

The Negro Servant and the Black Prince

Two stories of the providence of God in striking conversions.

The first story, The Negro Servant, was written by Legh Richmond early in the 1800s. This pastor’s warmth and tenderness toward his people comes through loud and clear as he touchingly conveys this beautiful conversion story which he witnessed in his own town. In times of great prejudice, this story was a warm demonstration that Christ welcomes all peoples to Himself.

The second story, The Black Prince, shows how life often does not turn out as expected for those who commit their lives to serve the Lord. Even for those in positions of great power, God still rules and has His own plans for each of us.

This volume also contains a brief concluding story, The Troubles of Life, about how those who rely on the Lord have secret resources to draw on, in times of difficulty, that self-sufficient men of the world can never possess.

The book concludes with “Patient Joe”, a touching poem about a man with confidence that God worked all things together for good even when events crossed his hopes and expectations.

The Negro Servant and The Black Prince is one of the volumes in The Children’s Heritage Series – Boy’s Collection, which also has seven (7) other books, including: