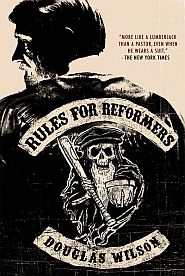 In Rules for Reformers, Douglas Wilson poaches the political craft of radical progressives and applies it to Christian efforts in the current culture war. The result is a spicy blend of combat manual and cultural manifesto.

In Rules for Reformers, Douglas Wilson poaches the political craft of radical progressives and applies it to Christian efforts in the current culture war. The result is a spicy blend of combat manual and cultural manifesto.

“Wilson is more like a lumberjack than a pastor, even when he wears a suit.” — The New York Times

“I much prefer Wilson’s sincerity to the vague and Python-esque witterings of the interfaith and ecumenical groups who barely respect their own traditions. He is willing to maintain very staunchly that Jesus of Nazareth was the Christ and that his sacrifice redeems our state of sin.”
— Christopher Hitchens, prominent atheist

“This book is quintessential Douglas Wilson. Which is to say it’s very good, very smart, and flashes Wilson’s spiritual gift of sarcasm. Wilson makes that old-time religion contemporary not by dumbing it down for the huddled masses, but through his trademark winsome snark. God’s people are better for it. His enemies — not so much.”
— Steve Deace, nationally syndicated radio host

“When friends ask me where I go for wise cultural analysis, the first name that always comes to mind is Doug Wilson. For years, I’ve found Doug’s commentary on culture, politics, economics, and family to be profoundly insightful and biblically faithful. In Rules for Reformers, Doug has packaged his wise and witty cultural commentary with shrewd and gracious application of the Scriptures. In doing so, he’s given those of us who love the gospel a manifest for grace-driven cultural reformation.”
— Joe Rigney, author of The Things of Earth and Live Like a Narnian and professor at Bethlehem College and Seminary

Introduction: A Tip of the Hat to Saul Alisnky

Douglas Wilson is Pastor of Christ Church, Moscow, Idaho, and author of numerous books on the family, church and various aspects of Western culture and education. His wife Nancy is also author of several women’s books.