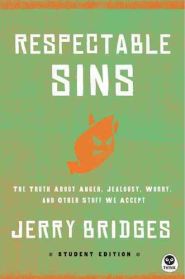 Christians talk a lot – maybe too much – about the really bad sins out there in society. But are we guilty of overlooking the sins in our own lives which we think are less important?  Such as self-righteousness, pride, anger, gossip, bitterness, even anxiety?

Jerry Bridges’ landmark book, which talks about the sins we tolerate in our lives and make light of, is here specifically adapted for teens – but without being ‘dumbed down’ at all.

Includes a great collection of Suggested Study Questions for each chapter.

The Truth about Anger, Worry, Jealousy, and other stuff we accept

Christians talk a lot – maybe too much – about the really bad sins out there in society. But are we guilty of overlooking the sins in our own lives which we think are less important?  Sins such as as self-righteousness, pride, anger, gossip, bitterness, even anxiety?  We treat them as respectable sins.

Jerry Bridges’ challenging book names the sins we tolerate in our lives and make light of.  But in this book, he adapts the topics to teens, without “dumbing it down” at all.

The book includes a great collection of Suggested Study Questions for each chapter.

The Pursuit of Holiness. Trusting God. The Practice of Godliness. The Joy of Fearing God.  One look at these book titles gives you a clear indication of what author Jerry Bridges is all about.  He aims to teach his readers how to know and understand God in a deep and meaningful way.  He knows how that knowledge can literally transform lives.

Jerry’s own life changed while serving as an officer in the United States Navy. It was during his military career that he first came into contact with The Navigators, an organization committed to this holy mission: “to reach, disciple, and equip people to know Christ and make Him known through successive generations.” Jerry soon felt God’s call to work for The Navigators ministry, and, in time, he became the vice president of its corporate affairs, applying his University of Oklahoma education. His relationship with The Navigators began in 1955, and it’s still going strong. Today, Jerry is a staff member with The Navigators Community Ministries Group, where he is engaged primarily in a Bible teaching ministry.

One major avenue for Jerry’s seasoned teaching abilities has been books. He’s written six to date: the four above, Transforming Grace, and The Discipline of Grace, which won a Gold Medallion Book Award from the Evangelical Christian Publishers Association. The Practice of Godliness has been honored as well with sales of more than 400,000 copies (and counting). But it is The Pursuit of Holiness for which Jerry is best known.

Selling over a million copies, The Pursuit of Holiness explains clearly how God has equipped us to lead holy lives, how reason and emotion influence our will, and how habits and personal discipline play a part in holy living. Many regard The Pursuit of Holiness as one of the foremost books stirring Christians to holiness ever written.

What Jerry Bridges means to his audience is evident—he’s a trusted, reliable source of spiritual wisdom that always leads them to the source of all things right and true: God.