View cart “Complete Puritan Paperbacks Series – all 55 volumes” has been added to your cart.
Sale! 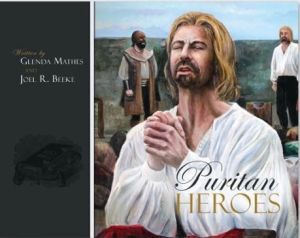 Who were the Puritans, and why are they important? What can we learn from them today? The Puritan movement began in England during the sixteenth century and continued all the way into the early eighteenth century. Although the Church of England was formed as a result of the Reformation, the Puritans believed it needed much more reform.

Puritan Heroes is a beautifully illustrated book that gives the reader an idea of what the Puritan movement was about and offers a glimpse into the lives of more than twenty of its most well-known leaders.

Who were the Puritans, and why are they important? What can we learn from them today? The Puritan movement began in England during the sixteenth century and continued all the way into the early eighteenth century. Although the Church of England was formed as a result of the Reformation, the Puritans believed it needed much more reform. Puritan Heroes is a beautifully illustrated book that gives the reader an idea of what the Puritan movement was about and offers a glimpse into the lives of more than twenty of its most well-known leaders.

Among them are William Perkins, Richard Sibbes, Thomas Goodwin, Anne Bradstreet, and Jonathan Edwards. The book concludes with ten important lessons readers can learn from the Puritans and study questions to help them retain these fascinating stories and assist them in applying the lessons to their lives. It also features a bibliography to encourage further study in greater depth, as well as a glossary and timeline to help readers understand historical context. Written for children and young people, it will prove a suitable introduction to the Puritans for adults as well.

“The most obvious virtue of this book is that it is a triumph of scholarship. Although I am a published Puritan scholar, virtually everything in this book was new to me. I have known the Puritans through their writings; this book introduced me to the people. Still more scholarly excellence appears after the biographical chapters in the form of a glossary of the Puritan movement, a time line, and bibliographies of both the Puritan movement and the individual Puritans covered in the book.

“The book is also a visual treat, with its abundance of photographs of places and buildings associated with people featured in the book and reproductions of contemporary materials such as people, buildings, and cover pages of documents. For me, the visuals made the book an instant page turner.

A Visual Treat and a Work of Scholarship

“It’s also a Puritan primer (‘first things’ in the dual sense of being introductory and covering things of first importance). The introduction and conclusion provide an overview of Puritanism, and as someone who has published this type of material myself, I will record my opinion that it cannot be done better than it is done here.
“The heart of the book is the portraits of twenty-one Puritan heroes. Three things stand out: all the major Puritans leaders are in the gallery; each one comes alive in a reader’s imagination; and the combination of factual information, imaged dialogue, and a narrative thread makes the chapters accessible to any reader, including young people.

“This book has something for everyone. For people who are new to the Puritans, this is the introduction they have been looking for. Study questions for the individual chapters make the book ideal for Christian schools and home-schooling families. On the other hand, I will speak for my scholarly guild and say that no Puritan scholar would want to be without this book.”
—Leland Ryken, professor of English emeritus at Wheaton College and author of Worldly Saints: The Puritans as They Really Were

“How refreshing it is to step into the past. We need perspective and we need heroes. This book provides both. Richly illustrated, these brief but substantive biographies point us to faithful and fruitful servants. They remind us of our calling to be disciples. They encourage us to press on through trials and suffering. And they remind us to be joyful and grateful for all that God has done. Above all, they remind us to keep our eyes fixed on the one Hero, our faithful Lord and Savior.”
—Stephen J. Nichols, president, Reformation Bible College, and chief academic officer, Ligonier Ministries

“A masterful summary of the pick of the Puritans, introducing a new generation to a gospel-centered, life-embracing, family-oriented people, and—yes—people who enjoyed life instead of the dour, sour, and twisted folk that a hundred years of prejudicial narratives have made them out to be. I wish it every success in dispelling the myths that plague these godly men and women.”
—Derek W. H. Thomas, senior minister, First Presbyterian Church, Columbia, South Carolina

Glenda Faye Mathes is a graduate of the University of Iowa and an author of several books, including Little One Lost: Living with Early Infant Loss, A Month of Sundays: 31 Meditations on Resting in God, and Discovering Delight: 31 Meditations on Loving God’s Law, as well as the Matthew in the Middle fiction series for middle grade readers. She and her husband, David, have no greater joy than seeing their children and grandchildren walking in the Lord. She lives near Pella, Iowa, and blogs at glendafayemathes.com

Joel R. Beeke is president and professor of systematic theology and homiletics at Puritan Reformed Theological Seminary; a pastor of the Heritage Reformed Congregation in Grand Rapids, Michigan; editor of Banner of Sovereign Grace Truth; editorial director of Reformation Heritage Books; and a prolific author.