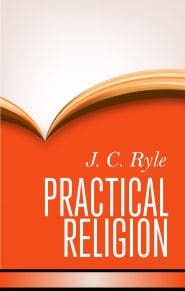 As with all Ryle’s works, Practical Religion is clear, concise and penetrating. It was designed to be a companion to his other books, Old Paths, Knots Untied and Holiness, providing guidance on how the Christian believer is to live. In Ryle’s own words, it ‘treats of the daily duties, dangers, experience, and privileges of all who profess and call themselves true Christians.’

Far from advocating a works-based religion, these papers are all about how a Christian can practically respond to the grace that has been freely given to him in the person of the Lord Jesus Christ. Ryle was a great enemy of hypocritical and nominal religion, or ‘churchianity’ as he called it. These articles remain a great plea for a real, heartfelt devotion to the Lord in love and service, founded on the great doctrines of Scripture.

No Christian who reads any one of these papers in Practical Religion will be left unaffected.  Ryle said, ‘Believer in Christ, remember this! Whatever you do in religion, do it well. Be real.  Be thorough.’

By “practical religion”, Ryle meant a Christian faith which set those who professed it on a course of sound, good works – but not in an effort to save one’s self, but because one has already been saved.  This is a collection of 21 of Ryle’s most-loved writings, covering a wide host of aspects of a Christian walk, including:
* Self-inquiry
* Sickness
* Zeal
* Prayer
* Happiness
* Freedom
* Going to the Table

…and many more. Just Ryle’s essay on “Sickness” is invaluable on its own!

In 1841, Ryle was ordained as a minister in the Church of England. In his first position in a rural parish he developed the plain and direct style of communication that would mark his future ministry. He served at several churches for the next forty years, during which time he wrote hundreds of evangelistic tracts. He was a wildly popular writer. His tracts sold more than 12 million copies in his lifetime, and were eventually translated into about a dozen European and Asian languages.

While his ministry flourished, Ryle’s home life was challenging. In 1844, he married his first wife, who died in 1847. He married again in 1849. The couple was happy, but his wife’s health was poor, so the pastor seldom travelled and practically raised his children alone. When his second wife died in 1860, he became a single father with five children between 2 and 14 years old.

Despite these hardships, Ryle became a leader among the evangelical clergy in his day. In 1880, he was appointed the first bishop of the newly formed diocese of Liverpool. Because the diocese was new, it had no system of leadership, no formal administration. During his tenure as Bishop of Liverpool, Ryle raised enough funds to build 90 new houses of worship, ordained over 500 deacons, 500 ministers, and at least 45 salaried lay Scripture readers and 31 Bible women. He founded the Lay Helpers Association, an organization that oversaw Sunday schools, Bible classes, mission services, and cared for sick.