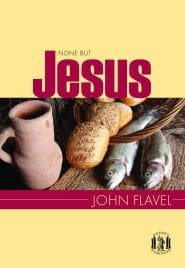 None But Jesus: Selections from the Writings of John Flavel (Pocket Puritans Series)

No one ever wrote and preached more richly of Christ than John Flavel did in his series The Fountain of Life. This little book, an addition to the Pocket Puritans Series, is full of thought-provoking quotations drawn from those writings, mostly focused on Jesus Christ, but also including topics such as providence, conversion, suffering, heaven, and glory.

Selections from the Writings of John Flavel

No one ever wrote and preached more richly of Christ than John Flavel did in his series The Fountain of Life. This little book, an addition to the Pocket Puritans Series, is full of thought-provoking quotations drawn from those writings, mostly focused on Jesus Christ. It also includes topics such as providence, conversion, suffering, heaven, and glory.

‘To read the work of a Puritan doctor of the soul is to enter a rich world of spiritual theology to feed the mind, heart-searching analysis to probe the conscience, Christ-centered grace to transform the heart, and wise counsel to direct the life. This series of Pocket Puritans provides all this in miniature, but also in abundance.’