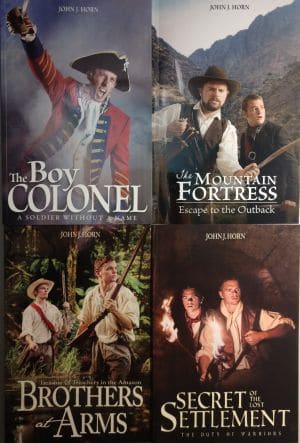 The Men of Grit Christian Fiction Series are gritty adventure novels that captivate the imagination of boys. Author John Horn aims to inspire boys to embrace their high calling as Christian men.  Enter the 1830s, a time brimming with mystery, unexplored territories, and new technologies bursting on the scene, as Old World fighting tactics are still in play.  But now, as then, the ever-present need for men to demonstrate manly honor and courage remains.

Book 1) Brothers at Arms: Treasure and Treachery in the Amazon

Book 2) The Boy Colonel: A Soldier Without a Name

Book 3) Secret of the Lost Settlement: The Duty of Warriors

Book 4) The Mountain Fortress: Escape to the Outback

Book 1) Brothers at Arms: Treasure and Treachery in the Amazon

Lawrence and Chester Stoning are twins, but like Jacob and Esau of old they have little else in common. Lawrence is a realist, fascinated by the study of science, mathematics, and history, while Chester longs for the knightly adventures of chivalrous times past – hard-fought battles, gold-filled caves, damsels in distress.

When Chester’s impetuosity engages the unlikely pair as bodyguards to a Spaniard and his beautiful ward, Pacarina, the twins quickly realize that the 19th century calls for a chivalry of its own. Protecting Pacarina’s secret leads all of them into the steaming jungles and dizzying mountains of Peru, a forbidding territory made all the more dangerous by Lawrence and Chester’s strivings against each other.

Can the twins learn to trust God and work together before it’s too late? Or will they fall prey to the mysterious schemes of Pacarina’s enemy – an enemy they know nothing about?

Book 2) The Boy Colonel: A Soldier Without a Name

“Edmund, do you understand, this is not what I want?  I was born for war, I have lived my life in war, and I will very likely die in war. But,” his voice lifted in the clear air, passion swelling his tones, “I do not intend it to be this war!”

The year is 1836. A mysterious young English soldier known as the ”Boy Colonel” commands a crack regiment in the snowy wastelands of Siberia. No one knows his history. No one knows his name. The Cossacks want him dead — but are they the only ones? It seems his worst enemy may wear an English uniform.

The Boy Colonel strives to perform his duty, but when that duty becomes mixed he must decide which sovereign is greater — the king of England, or the God of the Bible. Treachery, intimidation, and deceit block his path. His choice of allegiance may mean the difference between life and death. Is he prepared to risk all to protect his loved ones?

Book 3) Secret of the Lost Settlement: The Duty of Warriors

Colonel Nobody (The Boy Colonel) and the Stoning twins (Brothers at Arms) are back!

Outlawed for a crime he did not commit, the ”Boy Colonel” must seek pardon by finding witnesses to his supposed crime in the whaling fleet off Greenland’s coast. But his plans go awry when his search amidst the fjords and shifting ice-mountains leads him into a hidden valley peopled by descendants of a Roman expedition lost during Nero’s reign.

When twins Lawrence and Chester Stoning arrive with news of Queen Victoria’s ultimatum, Colonel Nobody must decide whether to stay and protect the colony’s persecuted Christians or venture to escape with the proof needed to save his best friend from hanging. Or will he survive the settlement’s horrors long enough to do either?

Book 4) The Mountain Fortress: Escape to the Outback

Colonel Nobody and Liana’s wedding goes horribly wrong when a group of men tries to kill them.  From this incident, they learn that a bad of assassins has been tracking him and will stop at nothing short of his death.  Lawrence, Pacarina, and Chester Stoning become entangled in the hunt.

The friends travel to Australia to flee their hunters and unearth Edmund’s long-lost brother.  But when the assassins and a mysterious Russian named Bogdan follow them there, they must battle for life in a strange land full of exotic beasts and bushwhackers.  It’s kill or be killed!  Who will come out alive?