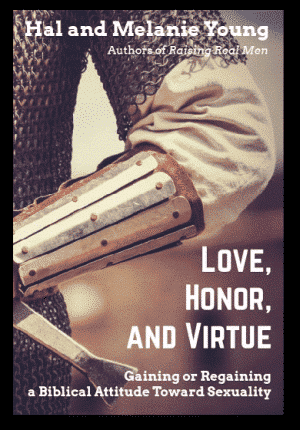 Gaining a Biblical Attitude Toward Sexuality

The Battlefield Is Different Than We Remember ….

The changes in technology and culture have put an entirely new face on the fight for moral purity. Temptation is nothing new, but where our generation had to avoid traps, our children are being actively hunted. Our sons are being exposed and ensnared by things that didn’t exist when they were born, and the conversations we had at 15 and 16 are necessary for 10 and 11 … and earlier … today.

If they want to walk in integrity, they have a fight on their hands.

A book written to and for teens and twenty-something guys. It’s short, concise, and very direct. It gives a Biblical perspective to help:

Gaining or Regaining A Biblical Attitude Toward Sexuality

A book written to and for teens and twenty-something guys. It’s short, concise, and very direct. It gives a Biblical perspective to help:

In a world where “gender is fluid,” sin comes looking for you, and the red light district rides in your shirt pocket, you need help engaging the fight as it actually is.

Read The Introduction to this book, below:

Introduction:
To the Young Men on the Battlefield

One of the sobering truths of military history is that an army tends to approach each war with the weapons and tactics of the last one. It’s a tough start that can turn to disaster if the army doesn’t learn and adapt quickly.

In 1755, when the red-coated British Regulars marched into the American wilderness to confront the French and their Iroquois allies, they expected to dominate the battlefield with disciplined maneuvers, volleys of musket fire, and relentless advances with fixed bayonets. That’s what won battles in Europe.

But those tactics didn’t work for fighting Indians.

It was pointless to protest, as some did, that Indian tactics were beneath the honor of a gentleman soldier. Sheltering behind rocks and trees, shooting the officers from their horses and melting into the forest—why wouldn’t they stand and fight properly?

The answer, of course, is the British had to learn what soldiers have learned again and again over the centuries: you have to fight the war you have, not the war you want to have.

The hottest part of that battle is likely the matter of sexual purity. Many of the older soldiers don’t realize how the fight has changed. They remember engaging the battle years ago and learning to combat the enemy’s weapons and ambushes for that time. With God’s help, they may have learned how to detect the hidden traps as new threats were deployed. Maybe the enemy shifted his focus to attack them in different areas.

But you’re in the thick of that fight right now, and you need all the help you can get. That’s the reason for this book.

Who do we have in mind as our readers? We are aiming for you, men and young men, who are struggling with the temptations and challenges of bachelorhood. We know it’s not easy. The world is throwing itself at you in a way we haven’t seen since the days of the Roman Empire.

And guys are being drawn into the fight younger and younger. When we first started writing and teaching on this issue just a few years ago, we heard from parents whose 17- or 16-year-old sons were having trouble with temptations—typically relating to pornography. It has rapidly moved to worries over 12-year-olds, 10-year-olds, even boys 8 and under.

So if you’re in your teens or twenties and feeling like there are temptations and pressures coming at you faster than you can process, you’re not imagining it. We’ll talk more about why that fact is, but for now, understand that even if you’re on the younger end of that range, the battle is real and personal for you, too.

Where We’re Coming From

We write from a Christian perspective. Even if you don’t share our worldview, there are good secular reasons to keep sexuality within the boundary of marriage, and we will talk about some of these in the pages ahead. But we believe the Bible is God’s word and serves as a reliable guidebook for life, faith, and relationships, even in 21st Century America. We don’t apologize for that, we just want you to know where we come from. We’re not psychologists or therapists, but a couple with a healthy marriage, six sons and two daughters, a lot of experience, and a lot of time studying the Bible and trying to put it into practice in our family life. We are going to speak frankly about topics we’d rather avoid, because we want you to be encouraged and equipped for life in a challenging world.

That world is coming for you and you need to be ready to engage the battle when it arrives. Avoiding it is not an option. You’re either a warrior, or a victim. We want to help you meet the challenge with your weapons ready.

And we ought to say that in our home, we consider anyone over the age of 13 as a young man, not a boy.

Here’s why. In the Bible, there seem to be two stages of life—childhood and adulthood. The apostle Paul, writing to the church in Corinth, said, When I was a child, I spoke as a child, I understood as a child, I thought as a child; but when I became a man, I put away childish things. Notice he doesn’t mention a middle stage we call adolescence or the teen years. Apparently, there’s one, and then the other—either a child, or a man.

The Bible does talk about youth. There is definitely a stage of early adulthood in which young guys still need training, supervision, and mentoring. But look at the passages which describe “youth” and ask yourself, does this sound like the teen group at church?

When David confronted Goliath, he was warned that the giant had been a man of war from his youth.

When God called the prophet Jeremiah, he protested, Behold, I cannot speak, for I am a youth, and God responded, Do not say, ‘I am a youth.’ For you shall go to all to whom I send you, And whatever I command you, you shall speak

Paul wrote to Timothy and advised him, Let no one despise your youth (another translation says, Let no one look down on your youthfulness), but be an example to the believers… Timothy had been traveling with Paul in his missionary work, and Paul left him behind to continue the work in Ephesus while the apostle went on to Macedonia.

Other passages describe youths as husbands and fathers—Rejoice with the wife of your youth and Like arrows in the hand of a warrior, So are the children of one’s youth, for examples.

So yes, there is such a thing as youth in the Bible. They are young men who have doubts, fears, and lack of experience, but they are also husbands, fathers, missionaries, prophets, and warriors. They’re young, but they’re not kids.

And youths are capable of quite adult sins. God observes that the imagination of man’s heart is evil from his youth, Job complains that God will make me inherit the iniquities of my youth,8 the psalmist prays to God, Do not remember the sins of my youth, and God tells the prophet Jeremiah, the children of Israel and the children of Judah have done only evil before Me from their youth. So, when it comes to sexuality, we’ve got to recognize that you young men are men—and are facing temptations toward very serious sins. We know these are real issues for you. Since we began talking with parents about this subject, we’ve heard time and time again from young men who fell into sexual immorality when they were 12 or 13 and spent years secretly fighting, and falling, and falling again, into the same sexual sins…and others.

So, for all of you, we want to help you fight this battle—to win!

A Note to the Church and Families at Large

Several years ago, we began speaking and writing about raising sons. We quickly discovered a large discrepancy between the reality of boys’ developing sexuality and the way parents were thinking and talking about it. Most of the teaching resources on the subject seemed to be written for the parents of girls. The problem is our daughters’ timetables are different, their sensitivities and attractions are different, and from our observation, the advice we might give our daughters was inadequate counsel given too late for our sons.

We actually meet parents who ask, “Can’t we just have a talk about this subject the week before our son gets married?” We hear from mothers who are embarrassed and angry that their husbands or church leaders think these matters should be discussed with pre-teens as well as older sons. We find parents, who believed they had total control over their sons’ media, shocked to discover how easily pornography can be accessed without a credit card and how casually friends will share those images on their phones or tablets.

So we began speaking and writing on this subject in hopes of helping parents with sons to understand their needs and how they differ from the needs of their daughters. Most of our message has been aimed at parents, but we were often asked, “What would you recommend as a resource to use with our sons?” We were also encouraged by young men to consider writing on the subject for them, which is the point of this book.

However, we want to encourage parents, church leaders, and others who may give this book to young men, to see it as a tool and not “the answer.” This book can spark a long and productive series of conversations about sexuality, purity, sin and forgiveness, relationships, and other topics—and we think it’s best used in that context.