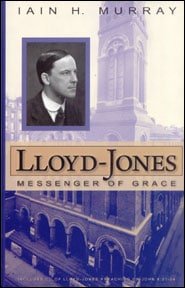 A fascinating study focusing on three significant themes in Lloyd-Jones’ ministry: true preaching; full assurance of salvation; and the grounds of fellowship between various Christians and their churches. Contains previously unpublished material and a CD of a Lloyd-Jones sermon.

With the death of Dr. Martyn Lloyd-Jones, the most powerful and persuasive evangelical voice in Britain for some 30 years is now silent.

Mark Dever, Senior Pastor of Capitol Hill Baptist Church, Washington D.C., wrote:
“Martyn Lloyd-Jones is one of the men I admire most from the 20th century, and the longer time goes on, my admiration of him increases. He had a more profound spiritual vision than anyone else I know.”

Iain Murray has already written a biography of Lloyd-Jones, but in this volume he chooses to focus on three themes of major significance. The first is the nature of true preaching, with fresh insight on what Lloyd-Jones regarded as of paramount importance in this.  The analysis distinguishes between what was true of Lloyd-Jones as an individual and what is the permanent essence of powerful preaching.

The second theme concerns the place that full assurance of salvation must have if Christianity is to be vibrant and persuasive.

The third theme addresses the claim that Lloyd-Jones’ understanding of the new Testament church was needlessly divisive.

There is new material here, including some pages where the author differs with his friend. But Murray seeks to follow Lloyd-Jones in seeing the glory of God as the end of all Christian life and thought.

Iain Hamish Murray, born in Lancashire, England, in 1931, was educated at Wallasey Grammar School and King William’s College in the Isle of Man (1945-49). He was converted in 1949 through the ministry at Hildenborough Hall, Tom and Jean Rees’ Christian conference centre in Kent. It was at Hildenborough later that same year that he first met Jean Ann Walters, who was to become his wife (they married in Edgeware on April 23, 1955).

After service with the Cameronians in Singapore and Malaya, he read Philosophy and History at the University of Durham with a view to the ministry of the English Presbyterian Church (his parents’ denomination). It was at Durham that he began to read the Puritans, whose writings were to become a lifelong passion. After a year of private study, he assisted Sidney Norton at St John’s Free Church, Oxford, in 1955–56, and it was here that The Banner of Truth magazine was launched, with Murray as its first editor.

From 1956 he was for three years assistant to Dr Lloyd-Jones at Westminster Chapel and there, with the late Jack Cullum, founded the Banner of Truth Trust in 1957. He left Westminster in 1961 for a nine-year pastorate at Grove Chapel, Camberwell. Dr. Murray became engaged full-time in Banner of Truth ministry from 1969 until 1981.  That year, he accepted a call from St Giles Presbyterian Church, Sydney, Australia. Now based again in the UK, he and Jean live in Edinburgh. He has written many titles published by the Trust, in whose work he remains active. He is still writing.