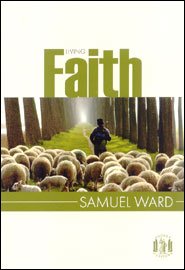 Another volume in the little Pocket Puritan series, from Rev. Samuel Ward. He explains the immense value of a genuine faith, not only as the gateway to salvation, but as the key to a joyful and triumphant life in this present world. Every Christian seeking to walk by faith will be edified and strengthened by a careful perusal of this sermon.

Another volume in the little Pocket Puritan series, from Rev. Samuel Ward. He explains the immense value of a genuine faith, not only as the gateway to salvation, but as the key to a joyful and triumphant life in this present world. Every Christian seeking to walk by faith will be edified and strengthened by a careful perusal of this sermon.

In the words of Sinclair Ferguson: “To read the work of a Puritan doctor of the soul is to enter a rich world of spiritual theology to feed the mind, heart-searching analysis to probe the conscience, Christ-centered grace to transform the heart, and wise counsel to direct the life. This series of Pocket Puritans provides all this in miniature, but also in abundance.”

Samuel Ward was born at Haverhill, in Suffolk, in the year 1577.  He was eldest son of the Rev. John Ward, minister of the gospel in that town. Ward was admitted a scholar of St John’s College, Cambridge, on Lady Margaret’s foundation, on Lord Burghley’s nomination, November 6, 1594, and went out B.A. of that house in 1596. He was appointed one of the first fellows of Sidney Sussex College in 1599.

Nothing is known of Ward’s boyhood and youth. His entrance on the work of the ministry, the name of the bishop by whom he was ordained, the date of his ordination, the place where he first began to do Christ’s work as a preacher, are all things of which apparently there is no record. His first appearance as a public character is in the capacity of lecturer at his native town of Haverhill, where he seems to have enjoyed some success and seen conversions.

From Haverhill, Samuel Ward was removed, in 1603, at the early age of twenty-six, to a position of great importance in those days. He was appointed by the Corporation of Ipswich to the office of town preacher at Ipswich, and filled the pulpit of St Mary-le-Tower, in that town, with little intermission, for about thirty years. Ipswich and Norwich, it must be remembered, were places of far more importance four hundred years ago, than they are at the present day. They were the capital towns of two of the wealthiest and most thickly peopled counties in England. Suffolk, in particular, was a county in which the Protestant and evangelical principles of the Reformation had taken particularly deep root.

Some of the most eminent Puritans were Suffolk ministers. To be chosen town preacher of a place like Ipswich, four hundred years ago, was a very great honour. This shows the high estimate which was set on Samuel Ward’s ministerial character, even when he was only twenty-six. Matthew Lawrence and Stephen Marshall, his successors, were both foremost men among the divines of the seventeenth century.

The influence which Ward possessed in Ipswich appears was considerable during his thirty years’ ministry there. Although prosecuted by Bishop Harsnet for nonconformity in 1623, Ward was only suspended temporarily from his office as preacher. Ward was one of the scholars involved with the translation and preparation of the King James Version.

After eleven years of comparative quiet, Ward was prosecuted again for alleged nonconformity, at the instigation of Archbishop Laud. He was found guilty, was enjoined to make a public recantation in such form as the Court should appoint, and condemned in costs of the suit. Upon his refusal to recant, he was committed to prison. Ward was held in such high esteem that after his suspension the Bishop of Norwich would have allowed his people another minister in his place; but ‘they would have Mr. Ward, or none’!