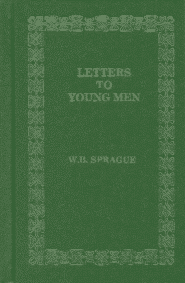 Relying on the life of Joseph (Genesis 37-50), this book springs into moral lessons on living in a corrupt society, how to handle living away from home, possession of wealth, and detailed sections on integrity, dignity, sympathy and more.

Founded on the History of Joseph

Relying on the life of Joseph (Genesis 37-50), Letters to Young Men applies that favorite and rich section of Scripture to moral lessons about living faithfully in the midst of a corrupt society.  It also includes instruction on how to handle living away from home, the responsible handling and possession of wealth, and detailed sections on integrity, dignity, sympathy and many more features of admirable character.

William Buell Sprague (1795-1876) was an Congregational and Presbyterian minister.  He compiled Annals of the American Pulpit (nine volumes, 1857–1869), a comprehensive biographical dictionary of the leading American Protestant Christian pastors during his times.

Sprague was educated at Yale during the Presidency of Timothy Dwight and graduated in 1815. He then went on to study at Princeton Theological Seminary under the tutelage of Dr. Archibald Alexander. His first pastoral call was as the Assistant to Rev. Joseph Lathrop at the Congregational Church in West Springfield, Massachusetts in 1819. After the Senior Minister’s death, Sprague stepped into that role and served there nine more years. He later accepted a call to pastor the Second Presbyterian Church of Albany, New York, where he remained for 40 years.

Sprague wrote numerous books, including Letters to a Daughter on Practical Subjects and his famous Lectures on Revivals of Religion.