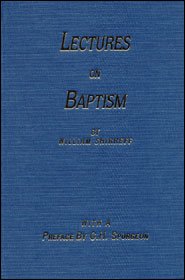 This clothbound volume by William Shirreff has a preface written by C. H. Spurgeon.

Also includes a treatise on “Baptism and Baptistries” by Wolfred Nelson Cote.

This clothbound volume by William Shirreff has a preface written by C. H. Spurgeon.

Also includes a treatise on “Baptism and Baptistries” by Wolfred Nelson Cote.

William Henry Shirreff (1785 – 1847) was an office in the Royal British Navy. He served as Captain of the frigate HMS Andromache, the HMS Warspite and the Gibraltar.  Shirreff and his wife had six children. Two of their daughters had a large and influential role in transforming the education of British women in regard to the teaching profession.

The Contents include sections on:

“Mr. Shirreff continued in Glasgow to set apart time for seeking counsel of God. He often said he was saved from much trouble and loss by doing so. On the last day of the year he was accustomed to remain for some hours alone, and after breakfast all the members of the family were called in. He first read a portion of Scripture containing a confession of sin, with a corresponding Psalm, and offered an appropriate prayer; then another portion, thanking God for the mercies of the past year, and closed with a prayer for all needed blessings and directions for the ensuing year. He had a great reverence for God. Sometimes in prayer, like Abraham, he threw himself prostrated on the ground before the Most High God.

The late Dr. James Hamilton, of London, when a student in Glasgow, took seats in Albion Street Chapel. He wrote after Mr. Shirreff’s death to Mrs. Shirreff that, “It has never been my lot to hear such masterful expositions of Scripture as then.”