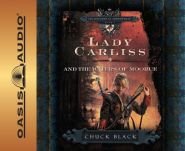 Lady Carliss and the Waters of Moorue: Audiobook (Chuck Black)

Audio book of Chuck Black’s Lady Carliss and the Waters of Moorue in his The Knights of Arrethtrae series.

Lady Carliss and the Waters of Moorue

A Knights of Arrethtrae Audiobook

Audio book of Chuck Black’s Lady Carliss and the Waters of Moorue in his The Knights of Arrethtrae series. 5 CDs, 7 hours play time.

Determined, smart and a master of both the sword and the bow, Lady Carliss has proven herself as a veteran Knight of the Prince. Returning from a mission of aid, Carliss is plunged into adventure once again as she searches for the marauders responsible for kidnapping a friends’ family. Along the way she is reunited with Sir Dalton and discovers that the struggle in her heart is far from over. When Dalton falls to the vicious attack of a mysterious, poisonous creature, Carliss finds herself in a race against time. As Dalton clings perilously to life, she must find the antidote in the distant and strange city of Moorue.

While there, Carliss uncovers the master plot of a powerful Shadow Warrior that will soon overtake the entire Kingdom. Her faith in the Prince and her courage as a knight are tested as she faces evil Shadow Warriors and a swamp full of dreadful creatures. The lives of many, including Dalton’s, depend on Carliss. But she cannot save them all, for time is running out. She faces an impossible choice: save Dalton, or let him die so that others may live.

CHUCK BLACK, a former F-16 fighter pilot and tactical combat communications engineer, is the author of thirteen novels, including the popular Kingdom Series and The Knights of Arrethtrae series. Chuck and his wife, Andrea, have six children and live in North Dakota.