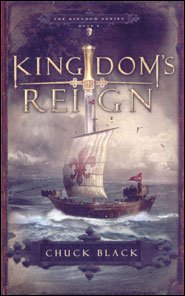 An evil army masses against the Knights of the Prince, and they are outnumbered. Only the King can save them.

Journey to Arrethtrae, where the King and His Son implement a bold plan to save their kingdom; where courage, faith, and loyalty stand tall in the face of opposition; where good will not bow to evil – and where the King reigns, along with His Son! This 6th volume in The Kingdom Series completes the set of allegorical representations of the story of the Bible.

Book 6 of The Kingdom Series

An evil army masses against the Knights of the Prince, and they are outnumbered.
Only the King can save them…

While the Knights of the Prince train in the Kingdom Across the Sea, the Dark Knight, Lucius, reigns in Arrethtrae with complete authority. But when a small group of loyalists swears allegiance to the King, the Prince returns, and in a mighty battle, Lucius and the Shadow Warriors are vanquished and imprisoned in the Wasteland.Peace and prosperity renew the land, and the Prince rules from the royal city of Chessington. While the heroic Cedric travels as ambassador, he sees that every corner of Arrethtrae reaps the benefits of prosperity brought to the land by the Prince’s reign.But not everyone will swear allegiance to the King, and it seems this paradise may be lost yet again because of the pride and greed of evil men who plot to free the Dark Knight and his minions. Cedric rides desperately to bring the news before it’s too late…

Journey to Arrethtrae, where the King and His Son implement a bold plan to save their kingdom; where courage, faith, and loyalty stand tall in the face of opposition; where good will not bow to evil–where the King reigns…along with His Son!

CHUCK BLACK, a former F-16 fighter pilot and tactical combat communications engineer, is the author of thirteen novels, including the popular Kingdom Series and The Knights of Arrethtrae series. Chuck and his wife, Andrea, have six children and live in North Dakota.

The Story Behind The Kingdom Series

“When my six kids’ eyes glossed over during a reading from the Bible, I paused to explain the significance of redemption to a sin-sick soul. I was rewarded with patronizing elephant nods and more blank stares. Shortly thereafter, I awoke in the middle of the night with a medieval story enveloping my mind. I wrote it down and later read it to my children. Their waning attention transformed into complete anticipation. I was amazed and disappointed. Why did it take a fictional story, not a Bible passage, to get that response? Then I realized—that is how Jesus taught! Parables are powerful! I penned the Kingdom series to help young people get excited about the supremely significant story of Jesus Christ and His mission to save mankind.”  — Chuck Black