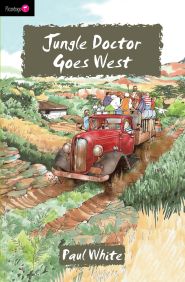 Another story in the Jungle Doctor Series!

Jungle Doctor becomes ill himself and has to rest and then recover by traveling to another part of Tanganika. Mboga, his assistant tries to be helpful but often with rather disastrous but sometimes amusing results.

Book 17 of the Jungle Doctor Series!

Jungle Doctor becomes ill himself and has to rest and then recover by traveling to another part of Tanganika. Mboga, his assistant tries to be helpful but often with rather disastrous but sometimes amusing results.

Paul White was an Australian missionary doctor in Africa who learned to clothe his Bible teaching in stories with a timeless quality. When he returned home to Australia his stories were discovered and published to world-wide acclaim.

Born in 1910 in Australia, Paul had Africa in his blood as long as he could remember. His father captured his imagination with stories of his experiences in the Boer War which left an indelible impression. His father died of meningitis in army camp in 1915, and he was left an only child without his father at five years of age. He inherited his father’s storytelling gift along with a mischievous sense of humor.

He committed his life to Christ as a sixteen year old school boy and studied medicine as the next step towards missionary work in Africa. Paul and his wife, Mary, left Sydney, with their small son, David, for Tanganyika in 1938. He always thought of this as his life’s work, but Mary’s severe illness forced their early return to Sydney in 1941. Their daughter, Rosemary, was born while they were overseas.

Within weeks of landing in Sydney, Paul was invited to begin a weekly radio broadcast.  Its popularity spread throughout Australia as The Jungle Doctor broadcasts!  The last of these was aired in 1985. The weekly scripts for these programs became the raw material for the Jungle Doctor books.

The books in part or whole have been translated into 109 languages.

Paul saw that although his plan to work in Africa for life was turned on its head, in God’s better planning he was able to reach more people by coming home than by staying. It was a great joy to meet people over the years who told him they were on their way overseas to work in mission because of the Jungle Doctor books!