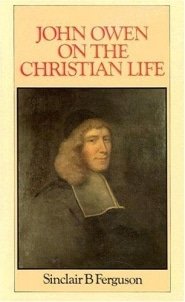 John Owen on the Christian Life addresses the fundamental issues Christians face in every age and provides us Owen’s thoughts on them:

How can I live the Christian life?  How am I to deal with sin and temptation?  How can I find assurance, and live for the honor of Jesus Christ? These and much more are covered.

This is the first book-length study of any aspect of Owen’s thought; it also stands on its own as a study in pastoral theology. Ministers, Christian leaders, readers of Owen, and those who are daunted by the sheer vastness of Owen’s writings will find this book an ideal summary of his thought.

John Owen on the Christian Life

A volume that addresses these fundamental issues which Christians face in every age:

“I need not tell you of this who knew him, that it was his great design to promote holiness in the life and exercise of it among you.  He was a burning and shining light, and you for a while rejoiced in his light.  Alas!  It was but for awhile. And we may rejoice in it still.” — from David Clarkson’s Funeral Sermon the death of John Owen

This is the first book-length study of any aspect of Owen’s thought; it also stands on its own as a study in pastoral theology. Ministers, Christian leaders, readers of Owen, and those who are daunted by the sheer vastness of Owen’s writings will find this book an ideal summary of his thought.

John Owen has long been recognized by evangelicals as one of the greatest of all English-speaking theological classics. Like Augustine, whom he so admired, Owen’s thinking touched both the depths of sin and the heights of grace. Many of his readers have come away from reading him on such themes as temptation, or indwelling sin, feeling that Owen knew them through and through.

Study of Scripture and of the human heart

The truth is that Owen had come-by intensive and constant study of both Scripture and the human heart- to know both himself and God. It was out of this rich experience that he preached and wrote on the loftiest themes of Christian theology.

Because of this background, Owen’s teaching was always pastoral in its concern. His aim, said his assistant David Clarkson, was ‘to promote holiness’. Consequently his work has survived through the centuries and is now more widely recognized and appreciated than it has been for many years.

John Owen on the Christian Life expounds Owen’s teaching on these and related themes.

Sinclair Buchanan Ferguson retired in 2013 as Senior Minister of First Presbyterian Church in Columbia, South Carolina, and returned to his native Scotland. Prior to this he held the Charles Krahe chair for Systematic Theology at Westminster Theological Seminary and served Church of Scotland congregations in Unst (Shetland) and Glasgow (St George’s Tron). He received his Ph.D. from the University of Aberdeen (1971).

Dr Ferguson has authored several books published by the Trust, of which he is a trustee, and a former editor. He retains his position as Professor of Systematic Theology at Redeemer Seminary, Dallas, Texas, and serves as a Teaching Fellow with Ligonier Ministries. He continues to preach God’s Word in churches and at conferences.

Sinclair and his wife Dorothy have three sons, a daughter, three grandsons, and three granddaughters.