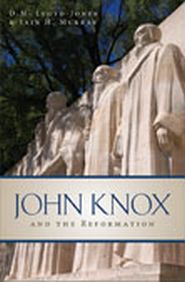 In three fascinating addresses Dr. Martyn Lloyd-Jones and Iain Murray remind us why we ought to remember one of the most colourful figures in church history, John Knox, and his significant role in the story of the Reformation in both Scotland and England.

John Knox and the Reformation

In three fascinating addresses Dr. Martyn Lloyd-Jones and Iain Murray remind us why we ought to remember one of the most colorful figures in church history, John Knox, and his significant role in the story of the Reformation in both Scotland and England. This volume will encourage readers to not only remember Knox the man but also to consider the outcome of his life and imitate his faith (Hebrews 13:7).

It is the duty of all Christians to remember those faithful men from whom they heard the gospel of Christ. For those of Scottish descent no Christian leader deserves more to be remembered than John Knox. Born in Haddington around 1514, he took his stand for the Reformation alongside that ‘blessed martyr of Christ’, George Wishart. Assured of God’s call to the ministry of the Word while at St. Andrews, Knox endured many hardships in bringing the gospel’s message to a people in great spiritual darkness. Under God’s blessing he was instrumental in transforming the nation and his stamp, though somewhat faded, still bears its impress upon the Scottish people, both at home and abroad.

Commemorating the 500th anniversary of the birth of John Knox, this little book will encourage readers to not only remember the man but also consider the outcome of his life and imitate his faith.

David Martyn Lloyd-Jones was born in Cardiff and raised in Llangeitho, Ceredigion, Wales. Educated at Tregaron County Intermediate School and then in London at Marylebone Grammar School between 1914 and 1917, he went to St Bartholomew’s Hospital as a medical student. He then worked as Chief Clinical Assistant to the Royal Physician, Sir Thomas Horder.

After sensing a call to preach, in 1927 Lloyd-Jones returned to Wales.  He married Bethan Phillips, and they had two children, Elizabeth and Ann.  He was called to be minister at the Bethlehem Forward Movement Church (known as ‘Sandfields’) in Aberavon.

After eleven years at Sandfields, he was called in 1939 to be associate pastor of Westminster Chapel, London, working alongside G. Campbell Morgan. During the same year, he became the president of the Inter-Varsity Fellowship of Students (known today as the Universities and Colleges Christian Fellowship (UK). In 1943 Campbell Morgan retired, leaving Lloyd-Jones as the sole Pastor of Westminster Chapel, a position he was to hold for the next 25 years.

After retiring from Westminster Chapel in 1968, due to illness, for the rest of his life ‘the Doctor’ concentrated on editing his sermons for publication, counselling other ministers, answering letters and attending conferences. He preached for the last time on June 8, 1980, at Barcombe Baptist Chapel. He died peacefully in his sleep at Ealing on March 1, 1981, and was buried at Newcastle Emlyn, near Cardigan, west Wales.