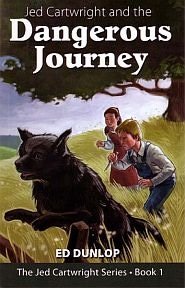 The full set of all five (5) books in the Jed Cartwright Series!

Book 2: Jed Cartwright and the Lost Gold Mine 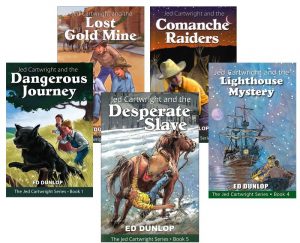 Unknown to orphans Jed and Mandy, God has a perfect plan for their lives. As events unfold, He reveals His love for them. This gripping story of God’s love and redemption is both entertaining and heartwarming.  Jed Cartwright is a new series of Christian books that will encourage and inspire young readers!

Ed Dunlop is a children’s evangelist whose numerous books are popular with young people and adults alike. In this first volume, he has given us a thought-provoking treasure. Travel along with Jed and Mandy through heartbreak, danger and God’s provision. Experience with them the fact that in spite of true hardship and genuine challenges, God sees, seeks, forgives and welcomes anyone who will come

Book 2: Jed Cartwright and the Lost Gold Mine

When Jed and his new brother Nathan accompany Pa Cartwright on a trip to the Colorado Territory, they learn of a gold mine that has been lost for more than thirty years. Setting out to find it, the boys discover that someone else knows the mine’s whereabouts. And that someone is willing to kill to protect the secret.

Jed gets his own horse, a beautiful black stallion, and the kind widow who had cared for them when they were in need earlier comes to live with them in St. Louis. Then a family who had been enemies become friends. How could life get any better?

Just when it seems that everything is perfect, Jed and his sister, Mandy, are kidnapped by a party of Comanche raiders. They are taken far to the west and kept closely guarded as prisoners by the tribe. As they experience the strange customs of their captors, they wonder what is to be done with them and whether or not they will ever see their home again. Experience Jed and Mandy’s adventure as they seek the Lord’s help in escaping from the Indians and making their way back home.

Join Jed Cartwright and his family as they travel by train to South Carolina to meet Jed’s adopted grandfather, the keeper of the lighthouse at Sharktooth Point.

During their visit, Jed and Nathan discover that someone is using the old lighthouse to signal a mysterious ship at sea. When the local constable warns that a gang of international smugglers is operating in the area, the boys guess the purpose of the clandestine lighthouse signals.

Who is sending secret signals from the old lighthouse? Why doesn’t Grampa want to talk about it? Who is the stranger who disappears on the open beach, leaving no trace behind? Is Grampa involved with the smugglers?

Join Jed, Mandy and Nathan as they seek to unravel the conflicting clues and solve the mystery of the old lighthouse. This fast-paced adventure stresses the value of complete obedience to parental authority.

Foolishly accepting a dare from a group of boys in town, Jed Cartwright attempts to ride a mare that has not been broken, and is nearly killed as a result. Calvin, a quick-witted slave who happens to witness the event, manages to bring the unruly horse under control, thus saving Jed’s life.

When Elias Bentley, Calvin’s hot-tempered master, learns of his brave deed, he expresses rage by forcing Calvin to spend the long wintry night outdoors, chained between two trees. The Cartwrights learn of Calvin’s predicament and come to his rescue, and Pa Cartwright buys the poor slave from his abusive master in order to give him his freedom. Later, Pa also buys Calvin’s wife, Violet, but does not insist on getting a receipt.

Pa sends Jed and Calvin to the Bentley plantation to complete the transaction and bring Violet to Meadow Green, but they learn that Mr. Bentley has sold Violet a second time to a plantation owner in another state. Jed and the heartbroken Calvin set out to overtake the new owner’s coach in a desperate attempt to rescue Calvin’s wife.

Will Jed and Calvin reach Briarwood Manor in time to save Violet from a forced marriage? Can Pa Cartwright prove that Violet no longer belongs to Elias Bentley?

In this fifth Jed Cartwright adventure, the reader learns the importance of developing a good testimony and maintaining a good name.

Ed Dunlop has worked in children’s ministries full-time for more than thirty-five years. As an evangelist, he conducts Family Crusades in local churches and presents teacher-training seminars. Ed also speaks at junior camps, and conducts drug and alcohol awareness programs in schools.  He is also the author of the Kingdom Tales from Terrestria series.