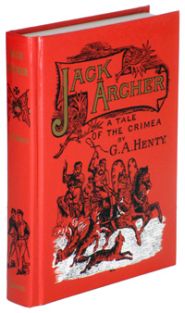 Our hero survives adventures at Gibraltar and the battles of Alma, Bacalava, and Inkerman, but is captured and is involved in the death of a Russian official. He escapes, goes through the fall of Sebastapol, and ultimately marries a wealthy Russian girl.

A Tale of the Crimea

The Crimean War was the first major war among Europeans since the days of Napoleon. It exposed to the whole world the need for great changes to be made in the British military. Jack Archer is a midshipman in Her Majesty’s Navy and survives many exciting times on the way to the Crimea.
Our hero has multiple adventures at Gibraltar and the battles of Alma, Bacalava, and Inkerman, but is captured and is involved in the death of a Russian official. He escapes, goes through the fall of Sebastapol. Before the final victory, he is made a prisoner, but eventually escapes of Poland and links up with partisans fighting the Russians.